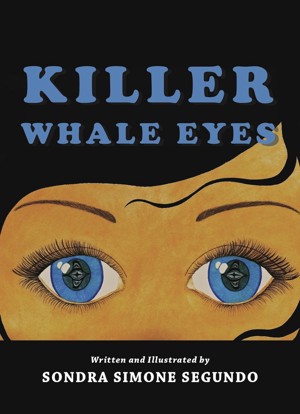 By Sondra S. Segundo
A story of a young Haida girl with a magical destiny.

Fall into the artwork and mythical story created by Haida artist Sondra Simone Segundo. More
"I was born into the Haida Double Fin Killer Whale Crest and Raven Clan. Killer Whale Eyes is inspired by the story of how my family’s Double Fin Killer Whale crest came to be. I changed some things out of respect for other Double Fins but the book and art still carry on our culture’s ancient and mythical style of storytelling.
An important note: Haida elders from our village translated the words of the song in Killer Whale Eyes into the Alaskan Haida dialect, a dying language. Soon after translating the song, my uncle Miijuu passed in March 2011 at the age of 100 and my auntie Viola passed on Dec. 2011 at age 85. It’s always sad when one of the pure language speakers passes on. That is why I have this drive to continue to write songs and learn the language.
Killer Whale Eyes poured out of me during a time of healing and transformation in my life. I created a tune to the song that I now perform at book readings and cultural performances. I honor my elders in this way. I hope you enjoy my book as much as I enjoyed creating it!"
~Sondra Simone Segundo

Sondra is a self-taught Haida artist who is passionate about using her talents to help keep her culture alive. There are less than 5,000 Haida in the world today and her language is one of the most endangered. This has lit a passion to preserve her culture in any and every way she can. She weaves this passion into all aspects of her life.
She is a Visual artist who creates a variety of traditional and contemporary NW Coast Native artwork and illustrates the artwork for her books.
A Storyteller that shares stories passed down by her elders & ancestors as well as new stories she has created.
A Published Author and Illustrator who creates new stories which become children’s picture books. Her first published book is called KILLER WHALE EYES.
A Teacher (and mother of 3) who has served in the Seattle Public Schools for over 25 years working mostly with our underrepresented youth.
A Singer and Performer who sings traditional music and composes new songs in her indigenous tongue. Sondra has a very soulful, melodic voice that has touched many hearts. She is also drum and dance leader for the dance group, The Haida Heritage Foundation.
To learn and teach her endangered language, Sondra has added the Haida songs she composed to her books which add a new dimension to her storytelling that truly connect the past with the present. She sees that connection as a crucial part of her people's healing and survival.
Sondra feels it is of high importance to work with and uplift the youth. She works hard to teach young people a reverence for all living things while opening their eyes to a future of endless creative possibilities. 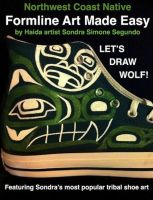 You have subscribed to alerts for Sondra S. Segundo.

You have been added to Sondra S. Segundo's favorite list.

You can also sign-up to receive email notifications whenever Sondra S. Segundo releases a new book.