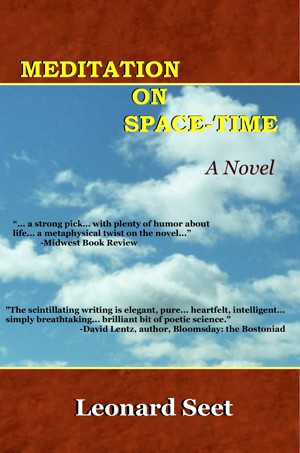 By Leonard Seet
Rated 5.00/5 based on 1 reviews
Father Lawrence fights against time to save his friends from an evil minister, but he finds out they have betrayed him and must decide whether to abandon the friendship even as he fights against the fiend.

Either mercy or justice; either salvation or friendship. Either choice: a flawed solution for a fallen man in a broke world More
“Meditation on Space-Time is a strong pick for those seeking a metaphysical twist…”
-Midwest Book Review

Even as Father Lawrence was hearing the stranger’s confession, he dreamed of probability waves, black holes and temporal loops. He came to Gilead to search for his friend Camellia, not to hear about this penitent’s vices: seducing women, framing rivals and laundering church-funds. After he had chased the penitent through the sanctuary into the church graveyard and lost the man, he found a note that revealed a connection to Camellia.

When he learned that Camellia was pregnant with this man’s child, he knew the time to play ostrich was over. But ever since the girl whom he had counseled, committed suicide, he preferred distancing himself from others than engaging their struggles. And ever since falling out with his best friend, he preferred contemplating the duality of space-time to sorting out his own joy and grief and love and hatred. If only he could free himself from his emotional scum… if only he could marshal the courage to polish off his search for enlightenment…

He would discover the hidden identities behind each face and Camellia’s helping the villain to bring him down. When faced with betrayal, he would lock himself in his cabin and struggled between retreating to his meditation on space-time and confronting the villain. He would renounce his vow and learn to equate a dollar with a cheeseburger. He would buy a gun without knowing how to load the magazine. He would search for his enemy. But when faced with the gun barrel, Father Lawrence would have to contemplate death… only to hear the three shots that saluted the dark night…

Either mercy or justice; either salvation or friendship. Either choice: a flawed solution for a fallen man in a broken world.

Meditation on Space-Time, A Novel portrays a man’s struggle to discover his identity in contemporary society, to sacrifice for his friends and to take the road less traveled. For readers who would eat up the hero’s every morsel of laughter and tear as if each were bittersweet chocolate. While sifting through clues to the characters’ true identities and hidden agendas.

“Leonard Seet has left no literary devices on the table to narrate his tale…I was enthralled by the pure beauty of the writing among all the plot points. The scintillating writing is elegant, pure, grownup, originally cast, heartfelt, intelligent… The writing is simply breathtaking… brilliant bit of poetic science… If you prefer intelligently crafted novels, then do yourself a favor and by all means read this unforgettable novel by Leonard Seet: the writing is to die for.” -David Lentz, author, Bloomsday: the Bostoniad

Leonard Seet is the author of the novels Magnolias in Paradise and Meditation On Space-Time and the non-fiction The Spiritual Life. His articles and short fiction have appeared in the Quarterly Literary Review Singapore, Banana Writers and Pilcrow & Dagger. Through his writings, he probes the dynamics of existence, including human consciousness, good and evil, and rationality and spirituality.

Meditation on Space-Time is a philosophical novel where the quantum mechanical worldview seeps into everyday life. The Uncertainty Principal, and especially the Many-World Interpretation, colors Father Lawrence’s perception of reality. A world of possibilities at every moment, where the outcome follows stochastic processes rather than deterministic laws.

But the priest also struggles between the religious life of doctrine and rites and the spiritual life of creativity and mystery, ultimately choosing the latter by renouncing his vow. Like Thomas Merton, he refuses to slaughter his intellect in the name of piety and religiosity.

Father Lawrence must tread through the desert of betrayals and losses to reach the oasis of friendship and enlightenment. And enlightenment is what he seeks rather than perfection—for Ichiro—and happiness—for Camellia. In the end, he must accept the loss of his best friend and carry the pain on his solitary journey toward enlightenment, or just old age.

Meditation on Space-Time is a novel of love and friendship, of good versus evil and of journeys taken. I recommend it for those who reflect such journeys. The lyrical prose that threads through the characters and their secrets is beautiful and provocative. A memorable novel.

You have subscribed to alerts for Leonard Seet.

You have been added to Leonard Seet's favorite list.

You can also sign-up to receive email notifications whenever Leonard Seet releases a new book.