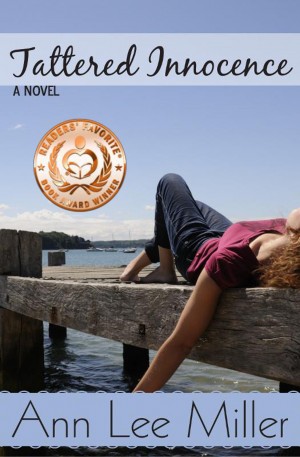 Ann Lee Miller earned a BA in creative writing from Ashland (OH) University and writes full-time in Phoenix, but left her heart in New Smyrna Beach, Florida, where she grew up. She loves speaking to young adults and guest lectures on writing at several Arizona colleges. When she isn’t writing or muddling through some crisis-real or imagined-you’ll find her hiking in the Superstition Mountains with her husband or meddling in her kids’ lives. Over 100,000 copies of Miller’s debut novel, Kicking Eternity, have been downloaded from online retailers.

I loved the story line of self-forgiveness in Ann Lee Miller's Tattered Innocence. Faith is an important part of the story, and the characters growth with the lessons they learned made me care and cheer for them.

The book is written in a fresh, unique writing style, and the characters of Jake and Rachel felt real and engaging. They were not perfect, and I liked it about them as well. The world of sailing was a bit unusual for me, but it pulled me into the story, and I might have learned several new words!

I loved the book, and I'm looking forward to read more books by Ann Lee Miller. I received the book in exchange for an honest review, which I have given.

After an affair with Bret, a married man, Rachel Martin wants to get as far away from him as she can. Jake Murray’s love life had just turned topsy turvy not only when his fiance Gabrielle dumps him, but she leaves him without a first mate on his charter cruise boat, The Smyrna Queen. Rachel applies for the job and gets it, but at her first meeting with him, she has made up her mind that her new boss is cold and unfriendly.
Jake left the corporate world to start his own business on The Smyrna Queen, a dream he shared with his deceased grandfather. Nearly everything he owns is in this venture. He needs a first mate to help him sail the boat and prepare meals for the guests. Since the only available sleeping quarters are in his cabin, Rachel makes it clear from the beginning that she is there for the job and nothing else.
It is quickly apparent that there is an attraction between the two of them, but neither will admit it because they are both still running away from previous relationships. Add to that, family problems, hurricanes, and the guilt they carry; this story has multiple layers to it. Since this is a Christian romance novel, there are references to God all the way through the book. Rachel convinces Jake to go to a beach service with her, and though he is skeptical at first, he comes around. There are often instances throughout where Rachel and Jake each reach out to God for guidance and forgiveness.
The book is well written, and the story will keep you turning the pages. If you are looking for a light romance novel and don’t mind Christian references, this is undoubtedly a book I would recommend.
Ann Lee Miller grew up in New Smyrna Beach, earned a BA in creative writing from Ashland (OH) University, and currently lives in Phoenix with her husband and children. She writes full time and lectures at various Arizona colleges.

Jake Murray advertises for a first mate to help him crew his charter sail boat. Rachel Martin eagerly takes the job. Jake and Rachel are running from their past mistakes. Rachel is pleased to find that the captain she will work for is only a few years older than her own twenty-something. Neither of them wants to share their pasts, which brings along the constant friction between the two. Jake and Rachel are real people with real problems. Characterization and descriptions are well done and there’s enough romantic suspense to keep you coming back to the book. Ann Miller is a good story teller. Ultimately this is a story of forgiveness, particularly forgiveness of self.

Tattered Innocence is the story of Rachel Martin and Jake Murray, both a little broken by their personal lives. Rachel, needing an escape from her life, sets out of find a job that will take her anywhere but here. She applies for a job as first mate on Jake’s boat, the Smyrna Queen. Rachel is not impressed by Jake at their first meeting, he seems rude and standoffish. Not one to let an opportunity pass though, she hopes for the best and does end up getting the job, mostly due to Jake’s lack of other options.

Jake is coming out of a long term relationship/engagement himself and basically has no idea where he’s going now. His fiancée, Gabrielle, has decided she wants a different life in Arizona while he’s left heartbroken and alone on the other side of the country. In comes Rachel, and the rest is history. Kindof.

I did not think I’d enjoy this book, I would say on the list of things I would normally not choose to read, Christian fiction is pretty close to the top, right below biology text books and possibly emails from my boss. I didn’t hate it though, actually. The story didn’t get too preachy, but there were definitely “God’s plan” references, etc. which I didn’t mind too much because they were not on every single page, but some people might not even want that which is perfectly fine, to each his own! Rachel and Jake are not by any stretch “perfect” and that makes them real and likable. Rachel was sarcastic in the face of adversity, which is good, I don’t think I’d be the stoic type either. She made the best of her situation and it worked out for her. I will admit, I did not like Bret and didn’t understand her inability to get over him initially, but I was glad she came to her sense. Also, the sailing term glossary was a bit daunting, but I skipped it and don’t think I missed out on any nuances because of that.

The only semi-frustrating thing I found with this book was I felt it was too wordy at times. Yeah, you definitely did get the whole picture, but sometimes I felt like no one could just DO anything; it always had to be accompanied by a lot of adjectives and adverbs. Lots of ads, basically!

All in all, I was pleasantly surprised by this book and glad I gave it a shot. Jake and Rachel aren’t my typical fare, and maybe the freshness of it made me like it more, but whatever, that’s fine! Give it a read if you like new adult type romance, Christian fiction or just need a light read.

I received this book in PDF form and the problem I have had with e-books…is I lose them in all the way too many files I have on my laptop…and also my laptop over heats so, I struggle with e-books…but, I find them and read them because I will usually be blessed because of their stories or information!!! I finally found this one and YES I was blessed that I did!
Ann is an exceptional author and story teller… I have become a big fan of her writing, and this book is no exception. In short, this book is about forgiveness and I absolutely loved the way the story conveyed such a powerful message to the reader.
God bless you, Ann in all you do for Him. In Jesus Name Amen.

(reviewed 5 months after purchase)
Marilyn Moore reviewed on April 13, 2013
(no rating)
Anne Miller has crafted another multi-layered story that intricately brings the lives of Jake and Rachel together in a beautiful tapestry. Anne takes the broken threads from their lives and weaves those threads together to create a story about moving from brokenness to wholeness. In the process they learn to forgive themselves and those who have hurt them. Anne’s characters are real, with flaws and life hurts that one can easily identify with. Supporting the main characters is a cast of colorful people who are also struggling with their own challenges and issues. This is a book that will you’ll thoroughly enjoy and not want to put down.

Tattered Innocence continues Ann Miler's proven track record of exploring the inner life of twenty-somethings in an honest and compelling way. This book explores the themes of guilt, forgiveness, grace and love in a genuine and thought-provoking way. This was probably my favourite of Miller's four novels, and the closing line has stuck in my head for two weeks now. For anyone struggling with self-forgiveness; for anyone who feels dirty or guilty; for anyone who wants to move beyond the mistakes of the past, but doubt's God's ability to redeem their failures; for anyone who just wants to enjoy a good book, this is an excellent read!

Wow. This story turned me every which way that was possible. Joy, heartache, humor, uncertainty and more, found their way into my thoughts throughout this book. It brought me back to my younger days of first love, innocent kisses and broken hearts. Days filled with adventures and Dairy Queen, and nights of "Vanilla Moons". Ann Lee Miller has a way of describing the events in such detail that you feel like your right there feeling the ocean spray and tasting salt air. This was indeed a story of mistakes, forgiveness and true love. Absolutely loved this book and look forward to reading more from this author!

Seventeen years in the making, Ann Miller's Tattered Innocence nails the question, "What does forgiveness feel like?"

In keeping with her tagline Flawed people, Flawless God, Ann drops us into the uber drama of Jake and Rachel, both raw with the hurt of breakups, setting sail on The Smyrna Queen. Captain Jake is clearly unhappy, but so is his new first mate, Rachel. Together, they learn that God meant it when He said, "When you pass through the waters, I will be with you." Physically, spiritually and emotionally, they are forced to face their deepest fears and flaws.

Rachel is reminded of "how she used to listen for God, the sound of the ocean in a conch shell - constant, ethereal. But she'd dropped the shell, not wanting to hear what He had to say about Bret...Did she have the strength left to pick up the God-shell?"

Ann's Tattered Innocence is full of anguish and beauty. If you loved her 20-something novels Kicking Eternity, The Art of My Life and Avra's God, you will fall in love again with the New Smyrna Beach extended family and friends.

You have subscribed to alerts for Ann Lee Miller.

You have been added to Ann Lee Miller's favorite list.

You can also sign-up to receive email notifications whenever Ann Lee Miller releases a new book.