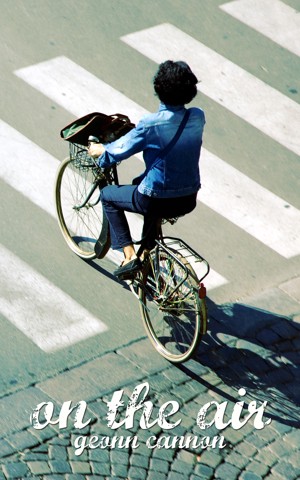 Desperate, under pressure and under siege from the startled, family-oriented advertisers and the station’s unsupportive owner, Nadine does one last show. With help coming from some unforeseen corners, she decides to make the most of her last time on the air.
Available ebook formats: epub mobi pdf rtf lrf pdb txt html
First 20% Sample: epub mobi (Kindle) lrf more Online Reader
pdb
Price: $2.99 USD
Buy Add to Library Give as a Gift
How gifting works
Create Widget
Tags: lesbians coming out squires isle kelf radio djs
About Geonn Cannon

Reviews of On the Air by Geonn Cannon

Review
Riva Silvercrown reviewed on March 23, 2013
(no rating)
I really like this book. I have read it many times and, after each reading, I've come to discover new details that make it even better than the time before.

Geonn knows how to build rounded characters that have many levels and how to portrait their reactions to their problems as completely credible.

I recommend this book to anyone that likes a good romance... or a good reflexion about today's society and its double standars for... well everything.

You have subscribed to Smashwords Alerts new release notifications for Geonn Cannon.