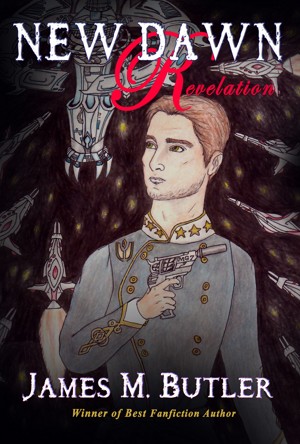 By James Butler
Rated 5.00/5 based on 1 reviews
Events are drawing power away from criminal organizations, but what happens when the syndicates decide to hit back?

New Dawn: Revelation exposes deception, even while religious and scientific fanaticism run rampant and darkness threatens to extinguish the light of newly dawned democracy. More
Kyle Kobain discovers a terrible secret. He worries what his new government, a government never before tried in known history, will do with it. Can he push past his own misgivings about letting the people decide the fate of the secret, or will he take matters into his own hands?

Qinn Lonn learns a horrible truth from his love, Zuuktaas, one of the mysterious beings of light. With a new organization growing powerful around him, will he risk everything by keeping silent?

Events are drawing power away from criminal organizations, but what happens when the syndicates decide to hit back? New Dawn: Revelation exposes deception and takes the galaxy to the verge of collapse. What will be born out of the destruction?

James M. Butler has traveled around the world. Part rock musician, part screenwriter (he's had a work optioned by Lion's Gate) and part novelist, James is perfectly at home with the written word.

James has tutored in many subjects, from Psychology to Geography. He prefers history and excels at the subject.

Originally from the swampy hell of south Florida, James has been called many things in his life, and cynical, sarcastic and sardonic are just three of them. He has also lived in various places around the world. Currently, James works as a care giver for the Developmentally Disabled at a group home somewhere in Ohio...

New Dawn: Revelation, the sequel to James Butler’s sweeping space epic New Dawn: Deception, picks up where the first book left off. Revelation is a story told on many fronts, depicting different corners Butler’s dark and dangerous galaxy that crash into each other in unexpected ways.

Butler depicts a nasty future in which crime syndicates hold most of the power. One of Revelation’s key story lines involves a space station struggling to maintain order and create a fair government in spite of the lawlessness surrounding it. Through this story line, Butler highlights some interesting ideas about the nature of democracy. Meanwhile, elsewhere in the galaxy, the newly risen leader of a pirate ship uses brute force to maintain her superiority over the various factions.

Deception introduced the reader to a species of godlike aliens—luminous beings who mesmerize and entrance. By Revelation, Gennifer Altich, the woman who first encountered these beings, has set up a new religion around them, with herself as the equivalent of her religion’s pope. She and her followers believe these aliens to be ascended humans, through whom enlightenment can be achieved. Little do they know that the beings are actually predators who feed on the souls of intelligent beings. The few who realize the truth and dare to speak up are treated as heretics and persecuted.

In yet another part of the galaxy, another conflict introduced in Deception continues. A race of sentient robots moves forward with its mission to eliminate organic life, whom they perceive as threats to their existence. An age-old conflict between the bots and the man who has pursued them continues.

All that I have mentioned above is but the tip of the iceberg. There is so much going on in Revelation that it can be a little hard to keep track of, and it’s one of those books where you really have to pay attention to get the most out of the story. Butler deserves kudos for his imagination, which seems too expansive to contain in one or even two little books. The vastness and richness of his galaxy is truly epic, and his stories spark with creative energy. He writes with a descriptive yet efficient style that brings the narrative to life while moving the many, many stories forward. At times, Revelation feels like several books smashed into one, taking place at the same time in the same galaxy yet independent of each other. Every so often, a character from one story will cross over into another. Although Revelation isn’t the fastest of reads, considering how much a reader gets out of it by the end, it’s pretty rewarding.

There’s enough material in Revelation to fill a bookshelf, and yet the author has stated that it’s the last of the New Dawn saga. By the end, all the stories have reached some form of conclusion. Some are tragic, some are triumphant, and some are ambiguous, much like real life. The galaxy isn’t saved—it’s still a brutish and violent place. The ending is open enough that Butler could easily carry on with the series. At the same time, the individual story lines that the reader has become invested in over the course of the two New Dawn books are given appropriate conclusions.

Revelation has everything a sci-fi fan would want—space battles, powerful aliens, sentient bots, and then some. Smartly plotted and brilliantly imaginative, Revelation reads like a highlights album of the space opera genre, sprinkled with Butler’s unique style.

You have subscribed to alerts for James Butler.

You have been added to James Butler's favorite list.

You can also sign-up to receive email notifications whenever James Butler releases a new book.