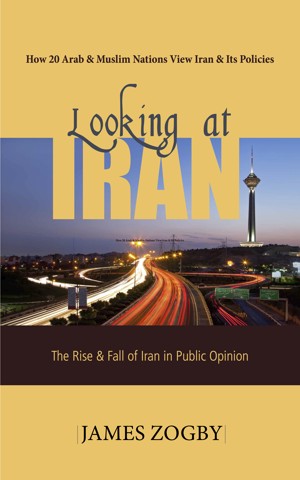 In "Looking at Iran: the Rise and Fall of Iran in Public Opinion", James Zogby examines how in just six years Iran has experienced a precipitous decline in popularity among Arabs and Muslims. Based on brand new polling in 20 Arab and Muslim countries, this book reveals:

- the degree of Iran's fall from favor during the past decade. Once praised for its defiance of the West, now it is increasingly seen as a meddlesome provocateur;

- the role played by Iran's involvement in Iraq, Bahrain and Syria in alienating Arab public opinion - with Syria being the "nail in the coffin" of Iran's popularity;

- the growth of a worrisome Sunni/Shia divide which threatens the unity of several Arab and Muslim countries;

- how Iran's nuclear program, once only the concern of governments, is now opposed by publics in almost every Arab and Muslim country; and

- how the Obama Administration's lower profile in the Middle East and "leading from behind" has actually improved US standing in Arab public opinion.

Dr. James J. Zogby is Managing Director of Zogby Research Services, LLC (ZRS), specializing in research and communications. He is the author of Arab Voices (Palgrave Macmillan, 2010) and the founder and president of the Arab American Institute (AAI), a Washington, D.C.-based organization, which serves as the political and policy research arm of the Arab American community.

Dr. Zogby has been personally active in U.S. politics for many years, he currently serves on the Executive Committee of the Democratic National Committee (DNC) and is Co-Chair of the DNC’s Resolutions Committee.

A lecturer and scholar on Middle East issues, U.S.-Arab relations, and the history of the Arab American community, he has an extensive media profile in the United States and across the Arab World. Since 1992, Dr. Zogby has written Washington Watch, a weekly column on U.S. politics that is currently published in 14 Arab and South Asian countries.

In addition to "Looking at Iran," he has authored a number of other books including "Arab Voices," "What Ethnic Americans Really Think" and "What Arabs Think: Values, Beliefs and Concerns," based on polling he conducted together with his brother John Zogby.

You have subscribed to alerts for James Zogby.

You have been added to James Zogby's favorite list.

You can also sign-up to receive email notifications whenever James Zogby releases a new book.