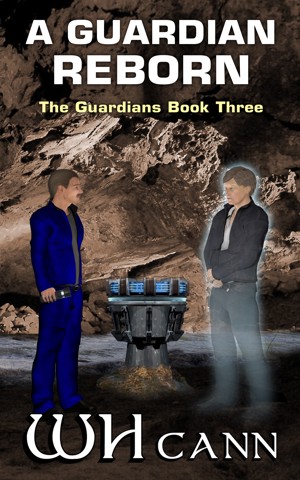 The Guardians Book 3: A Guardian Reborn

By W. H. Cann
Rated 5.00/5 based on 2 reviews
Grogaan survives his duel with Empress Hefrask, but his life hangs by a thread, and he has lost both memory and gift in magic. Ellarna hides him with a magical shield in a cave to prevent being discovered, and develops new abilities in magic while in hiding.

Can Grogaan recover physically and mentally, and regain his memory and magical power before the empire returns to continue its conquest? More
Having survived his duel with Empress Hefrask, Grogaan now fights for his life, which hangs by a thread. To prevent him from being discovered by Imperial forces, Ellarna hides him the cave where their ships are parked, and protects them by magic.

While in hiding, Ellarna discovers new gifts in the art of magic, ones greater than are currently known of by Guardian Master Taggash, and revealed to her by some strange creatures indigenous to Cassendra. When Grogaan finally awakes, he breaks some devastating news to his fiancée; he has lost both his memory and his gift in magic.

I am an indie author of science fiction and fantasy novels. I live in Pembrokeshire, Wales, am married with two children, and three grandchildren.

Also in Series: The Guardians

Reviews of The Guardians Book 3: A Guardian Reborn by W. H. Cann

In the aftermath of his fight against Empress Treyanna and his possession by an evil sorcerer, wizard-in-training and fighter pilot extraodinaire Grogaan Learman retreats to heal and regain his confidence. His power increases and previously lost secrets of magic are revealed; in the meantime, a new confrontation between the Empire and the Republic is brewing, while a previously unknown enemy waits in the wings.

Like the previous two books in the Guardians series, in A Guardian Reborn, shiny spaceships, futuristic technology, and exciting space battles blend with magic (unsullied by pseudo-scientific explanations) and wizards good and evil in an engaging mix of high fantasy and space opera with a touch of romance. The formal, slightly old-fashioned narrative style and omniscient viewpoint might make this book a little difficult for some readers to get into at first, but the engaging characters, tensions between the evil Empire and the Republic battling to preserve freedom in the galaxy, and the exciting battles both magical and involving space ships and laser cannons kept me reading.

Fans of Star Wars will especially enjoy these books, as will fantasy fans looking for a setting very different from the usual low-tech fantasy and science fiction fans in the mood for a little magic.

'A Guardian Reborn' is the final part of the Guardians trilogy, and what a finale. As has been the trait of his books so far, W H Cann's writing not only continues to mature in a way that makes you think this is book six or seven, not number three, but also his storytelling. From the beginning you are drawn to the story, particularly after the end of the previous book, which left Grogaan fighting for his life. Instantly, W H Cann has your interest, and although there is a steady pace at the start, you can't put the book down until you find out what happens to Grogaan. The book as a whole, flows in a way that never seems strained or slow, but with enough description to illustrate the scenes without doing too much. There are some great and original ideas that keep it fresh, and a whole new, exciting level to the magical powers Grogaan has slowly developed over the previous books, on top of which, have helped develop his character even more. It is interesting seeing how Grogaan's personality and attitude has been influenced by the events of this book, which contains some brilliant twists and turns, many you do not see coming.
I am not going to spoil it by giving away plot lines and such, instead leaving it for other readers to find out themselves, but there are a good few sub-plots and loose ends which are hopefully leading to a couple more books, as well as a surprising ending which i did not see coming. On top of that, W H Cann has developed more history behind the story of the Guardians, which adds to the overall reading of the book, so you get a bigger picture of the story and where it has come from.
All in all, another excellent book from W H Cann which rounds off the trilogy nicely and leaving it open for another sequel or two. Definitely an author to keep an eye out for