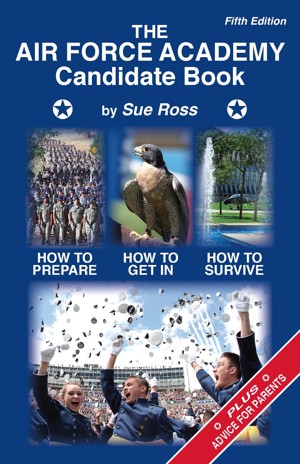 The Air Force Academy Candidate Book: How to Get In, How to Prepare, How to Survive

By Sue Ross
New and updated how-to guide for anyone interested in attending the United States Air Force Academy. Includes practical advices from hundreds of cadets, graduates, faculty and staff members, and parents on how to navigate the application process and how to survive the challenging first year, plus advice for athletes and a special section for parents.

Sue Ross is a retired Air Force colonel and 1983 Air Force Academy graduate. She is a command pilot with more than 3,100 flying hours in the T-38, KC-135, TG-7, and T-37, and has commanded at the squadron and group level. She served on the Academy faculty in the English department. During that assignment, she was the department s honor liaison officer, flew with the glider squadron, served as a squadron Associate Air Officer Commanding, and was a cadet sponsor. Her final active duty assignment was as speechwriter to the Chairman of the Joint Chiefs of Staff. She has also served a four-year term on the Air Force Academy Board of Visitors, and has served on a senator's service academy nomination panel.

You have subscribed to alerts for Sue Ross.

You have been added to Sue Ross's favorite list.

You can also sign-up to receive email notifications whenever Sue Ross releases a new book.