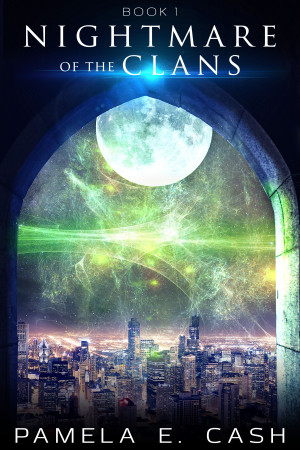 Nightmare of the Clans Book One

Pamela E. Cash lives in Chicago with her family and she loves supernatural books and movies.

I really enjoyed reading this book. The plot is original and I like the idea of 6 different clans from around the world with different paranormal powers. I agree with the reviewer below that the author's decision to write the narrative in proper English then switch to an urban dialect when the teens are speaking made the book more authentic. As a college student, I always speak proper English when I am in class, talking to a professor or talking to another adult. I switch easily to a more urban dialect when I am talking to my friends.

Although the book gets into the minute details of some events at times, it didn't detract from the storyline. The author keeps the plot interesting and I was pleasantly surprised at the way that Chassie deals with her mother's killer. It's not for the weak!

This book is a very good read and I'm looking forward to Book Two!

I originally read the paperback a while back and jumped on this site to get an electronic version. Interesting discussion. I enjoyed reading the book and as the father of two recent teens I found the dialogue style and flow familiar. The back and forth felt authentic. The book mainly focuses on Chausiku's current situation. Thankfully, the author provides ample historical context for the current state of affairs. But the "hooks" are in place for a richer follow up on concepts that were introduced. I liked the Clans concept and the storytelling around Chausiku's peril. The bad guys were well developed and their motivations clear. I found a lot to like in this teen novel and hope the author takes the time in subsequent books to tell the rich story that is hinted at.

After looking at my original review again, I think I was a bit too harsh, so here's a re-done version:

The main problem I have with the story is the awkward phrasing and poor grammar. However, I think a good editor could fix that up no problem. The real issue with the language is that, being used to proper grammar and better phrasing, I could hardly stand to read it. I think that skewed my opinion of the book.

Otherwise, the only real problems were the use of too many cliches and some bits that didn't make sense. I'm fine with the occasional cliche, but when there are as many as in this book, that's where I have a problem. Not making sense... that's never good, but again, is quite fixable. Let me throw out a few of the cliches I had problems with.

The first is the (arguably) most common cliche seen in stories--the strikingly beautiful main character(s) (though the completely ordinary ones are gaining in popularity. Although that's more often than not just used in romance novels so you can connect with the main character... But the guy is always gorgeous). Chassie and her best friend are just too unbelievable. They are drop-dead gorgeous, neither notice or care that other people stare at them for their beauty, and they both have noteworthy eyes. That's several appearance cliches all rolled into one. But they continue.

There's also the whole prophecy bit. Add to that the whole unbelievably-talented-mastering-skills-in-a-matter-of-days thing and you've got problems. I'm just really, really tired of cliches. There are more that I'm not going to bother mentioning, but you get the idea.

As for not making sense, the main problem I had was with the fact that Chassie is surrounded by people who know what she is, but nobody bothers to tell her until her 16th birthday, and even then, not until she's totally freaked herself out with her ability. There were other instances, but that was the main one. I understand that her father didn't want to tell her anything, but with the sheer number of people who thought keeping her ignorant was a bad idea, I'd have thought SOMEONE would've spilled the beans. Especially when she's the subject of a prophecy.

For all of the problems I have with the book, the idea is really quite good. The whole clan thing is totally interesting and the plot as a whole has some potential. I set out to read this book as just that--a published, polished, finished book, but what I got just wasn't quite up to par. I think this book would best be regarded as a rough draft. One with a lot of potential, but needing a lot of editing. So my rating of the book is based on my standards for a finished, polished piece, not on the idea itself. I think it would be misleading to rate it as high as other, well-edited books I've read.

You have subscribed to alerts for Pamela E. Cash.

You have been added to Pamela E. Cash's favorite list.

You can also sign-up to receive email notifications whenever Pamela E. Cash releases a new book.