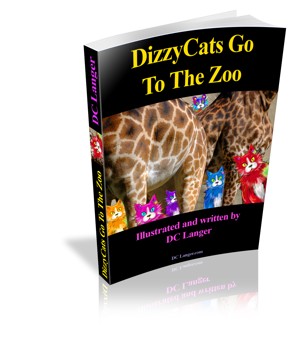 DizzyCats Go To The Zoo

By DC Langer
Cute and colorful DizzyCats spend the day at the zoo. More
DC Langer, author, illustrator, and creator of the DizzyCats, brings to you the DizzyCats' first book.

Explore their adventures as they spend the day at the zoo.

Brooklyn born DC Langer is a natural artist.
She began painting as a child along side
her artist mother. In fact, she was
painting even before she could talk.

DC's energy is clearly seen in her art.
The colors bounce clear off the canvas.
Her fascination with light and dynamic
color forms a foundation for her art.
Art critics always mention DC's
unusually enhanced color perception.
She notes "I see multiple colors in
everything, including what most people see as solid color.
When I look at my ceiling, I know it's white, yet I don't see white.
I associate numbers, shapes, sounds- everyhing, with color."

Her keen color perception--and the fact that she is able to instinctively
associate such mundane things such as numbers and names with color
("A" is cobalt blue and "6" is bright red)--is called "synaesthesia",
which is the innate fusion of the senses--something
that is shared with only one in 250,000 people.

DC’s work has been shown around the world and has won
international acclaim in various competitions.
A graduate of The School of the Museum of Fine Arts
in Boston, she spent several years as a
popular figure in the Boston arts scene.

DC Langer’s newest series ofpaintings
and drawings reflect her boundless
energy, and passion for music, creating
a unique synergy of color and motion.

You have subscribed to alerts for DC Langer.

You have been added to DC Langer's favorite list.

You can also sign-up to receive email notifications whenever DC Langer releases a new book.