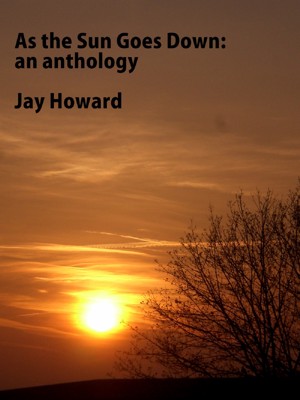 As The Sun Goes Down

By Jay Howard
Rated 4.50/5 based on 2 reviews
This book is set to FREE: if you enjoy the stories please make a donation to Saluki Welfare Fund. Every donation, large or small, helps the dedicated volunteers who rescue, care for and find new loving homes for Salukis who have fallen on hard times.

Come take a peek into the lives of some of the characters who live in my imagination. More
The stories:

Polly Polo - an elderly car breaks down in bad weather and a phone call to the breakdown service is needed.

Emily’s Hat - Emily’s husband is promoted and she must prepare for the company executives’ day out at Ascot.

Simile and Metaphor - a teacher is lacking inspiration for a class assignment until she overhears a conversation in a shoe shop.

Out the Other Side - Sophie persuades her husband that they should move to Devon, but their son throws a spanner in the works.

Something About Suzy - an abused Saluki escapes her fate as a brood bitch and discovers what it means to have a home and family.

Time Out - a teenager volunteers to help the disabled and learns some important life lessons.

Jay currently lives in Somerset, which she considers to be a gem among English counties. She has lived and worked in many places in England, Wales, Alberta and British Columbia. She describes writing as ‘enormously enjoyable and satisfying, but second only to golf in the level of frustration that must be endured to achieve the desired goal’.

Short story collections:
As The Sun Goes Down
Similar Differences

Reviews of As The Sun Goes Down by Jay Howard

As the Sun Goes Down, by Jay Howard, is a quiet little collection of stories that offers the reader brief glimpses into the lives of the characters. We see their struggles, their disappointments, and their successes as they deal with the problems surrounding growing up, dealing with relationships, work, marriage, and family.
In “Emily’s Hat,” I enjoyed rooting for the self-conscious Emily as a new hat helps her step out of her comfort zone and into a new role. In “Jackie’s Bike,” Howard’s excellent use of language draws the reader into the household of young Jane, the plucky protagonist, whose obsession with a neighbor’s bicycle leads to an all too brief adventure and a broken arm. I could hear the stern but loving tone in her hardworking father’s voice as he makes sure Jane learns a lesson in one scene, then the sigh of resignation that every parent experiences in another as he and Jane’s mother decide they need to buy the girl a bike of her own.
These aren’t plain, stock characters, they’re easy to imagine as real people. However, because they were so believable, I was occasionally frustrated when the stage was set on a new story, the characters and situations were introduced, and then the story would end too abruptly without reaching a satisfying conclusion, without telling the rest of the story! I was left wanting to know what was going to happen next! What happens the next day?
Still, these characters are worth getting to know, even if you’re only able to share a small slice of their lives.
I received a copy of this book in exchange for my honest, nonreciprocal review.

(reviewed 22 days after purchase)
Bridget Mattson reviewed on April 26, 2013
(no rating)
As The Sun Goes Down is a charming series of vignettes into life. I enjoyed the varied glimpses into characters who were both interesting and likeable. I can relate to having a 'hat'. Something that makes you feel so on top of the world that you almost feel a different person and was able to be taken to instances in my life where that has been the case. Thoroughly enjoyable, even if brief, leaving me wanting a larger glimpse!

I received a free copy of this book in exchange for an honest, nonreciprocal review.

Generally, I do not read short stories. I find that when I meet a character I like, I want the story to go on. I want to follow that person, get inside his head, discover what happens next. . . . Because short stories are just that—short—that part of the reading experience is not present with a short story. But, I discovered something with Sun. Sun revealed to me that it is for precisely this reason that short stories are so well liked. It is because the characters cannot be followed for the long term that the well-written character stays with the reader. There is a skill and a beauty to that fact, which Howard has captured.

The Sun is an anthology of short stories published on behalf of the Saluki Welfare Fund. There was another thing I learned with Sun. I had never heard of a Saluki before. A breed of dog, also known as the Gazelle Hound, it seems Salukis have come upon hard times. Howard’s anthology was published on their behalf. If they could know it, they would be proud of that fact.

Howard introduces her stories with an invitation to relax with your beverage of choice and “peek into the lives of the people who populate” her imagination and so, I did.

For me, Howard’s characters seemed like real people and I did enjoy the peeks into their lives. In Polly Polo, Julie writes her parents that, because of some odd event that had just transpired, she is feeling “quite blonde.” I expect this is precisely how a grown child might communicate with her parents. Julie, on her way to work in her “elderly car,” that engages in “a bit of asthmatic wheezing on the hilly bits,” runs into some trouble. She struggles with getting a number on her cell while speaking on it to someone at the same time—who hasn’t had that happen?—then resolves her problem. All in all, I identified readily with Julie—and I quite enjoyed the differences between the English of the UK and of the US!

I especially liked Emily’s Hat. I was reminded of times when my son, at 6’4,” was concerned about “standing out.” I told him that since he couldn’t hide, he should walk into a room like he owned it, like he meant everything he wore and was doing, like any attention that came to him was, perhaps, due him—that to do otherwise would make him stand out anyway-but not likely in a positive way! This is precisely what Emily did when she donned her hat and discovered that she could use the brim to allow others to see her or to hide from them completely. “With my hat I can be whoever I wish to be,” Emily said, and in that moment, Emily grew, while still maintaining her own unique, base personality. I think I enjoyed Emily the most of all of the Sun’s characters.

Howard exercises colorful language and descriptions. An example: “She stood on the kerb and gathered her courage around her, but it felt more of a wet paper bag than protective armour.” That single line provided deep insight into Emily. Or, how about this one: “And I have to giggle when Mam and Da go out: from behind they look like Laurel and Hardy.” A great word-picture, that. Or: “The only bright thing in the place was the gleaming, steaming, coffee machine, snorting exuberant steam at the cups.” Those coffee machines do rather snort, don’t they?

Overall, the stories were engaging, picturesque, no-nonsense, and insightful. There were numerous gems of wisdom sprinkled throughout. From a non-short story reader, a sincere congratulations for a job well done.

You have subscribed to Smashwords Alerts new release notifications for Jay Howard.

You have been added to Jay Howard's favorite list.

You can also sign-up to receive email notifications whenever Jay Howard releases a new book.