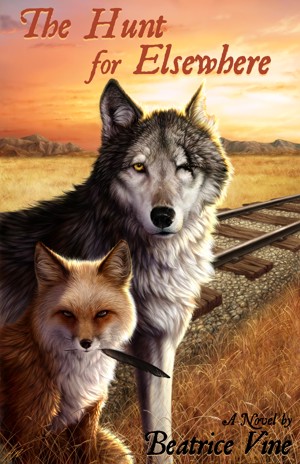 The Hunt for Elsewhere

By Beatrice Vine
Rated 4.71/5 based on 7 reviews
Foxes are cunning. Wolves are vicious. Yet Saxton the fox and Dante the wolf are so different from their brethren, they don't quite belong.

Thrown together by fate, this unlikely duo travel across the North American continent, chasing trains, fighting hunger, evading man, and confronting their own inner demons— all while searching for redemption, family, and a place to call home. More
Abandoned by his family and raised by a wise, old crow, Saxton grows up to be no ordinary fox.

Where other foxes are ruthless, Saxton is merciful. Where they are greedy, he is generous. But for all that Saxton believes in honor and love, kindness and courage, other animals deem him no better than the moniker his kind is fated to bear: Lonely Thief.

Meanwhile, Dante, a battle-worn wolf missing an eye and an ear, left his pack for reasons he keeps close to his chest. One too many bad memories has left him cynical, and yet he somehow remains faithful to a fault. His lonely life, plagued by misfortune and dishonor, changes forever the day he meets Saxton.

Thrown together by fate, this unlikely duo travel across the North American continent, chasing trains, fighting hunger, evading man, and confronting their own inner demons— all while searching for redemption, family, and a place to call home.

Beatrice Vine is the penname of Bettina Selsor. She is a University of Southern California graduate with a bachelor’s degree from the School of Cinematic Arts: Writing for Screen and Television. She now lives in Los Angeles with her husband, best friend, and fellow writer, Andy, and their beloved cat, Cici.

I did not really know what I was getting into when I started reading this book, but the description sounded interesting and the writing pulled me in from the opening pages. I think I expected some sort of “milo and Otis” story (great movie…see it if you haven’t already), but what I got was far more emotional, thrilling, and shocking. It really was a great read, but I felt the pacing was inconsistent at some parts, like it started off with a bang and then slowed down for a while. I just wonder how this will play out with the teens and pre-teens who like a more action-filled read. There is plenty of danger and peril along our hero’s journey, but often it is all too quickly resolved without any prolonged tension. But really this was just a minor thing that I thought would really elevate the book, but it was still quite good and I’m glad I read it. Would love to read more from this author in the future.

amazing. I loved this book and immediately sent it to my daughter’s kindle to read. (She is 14, I am…not). This book has some great themes and messages that are important, and delivered in such a way that the reader has an emotional attachment with what is going on. Even though there were some tough parts, and admittedly I thought some events could have been handled with more finesse, such is life, in that everything is not all roses and rainbows. I could possible see some readers thinking there needs more action, as there are times when the story slows down to take introspective looks. However, I for one thought it added to the overall character development and enhanced the story as a whole. So I am giving this wonderful book 5 stars and look forward to reading more from this author.

Okay, I simply adored this book! I completely fell in love with Saxton and loved watching him go through all of his trials and adventures and watching him grow. The thing that most surprised me about this novel was not only how well-written it was, but it is truly one that will appeal to adults as well as younger readers. I do, however, question just how young would be appropriate, as there are some challenging scenes that may be harder on the younger crowd. But if they can handle it there are many wonderful lessons to be learned in this charming tale. And the great drawings were a wonderful bonus!

Great book! Kept me turning the pages wondering what would happen next, and I read the whole thing in two nights. When I first started reading it, I thought it was going to be a bit like Finding Nemo, when Saxton the fox is separated from his family when hunters attack their home. And while I love Nemo, I was pleasantly surprised with the complexity and intelligent path this novel took. It’s certainly not some silly book about animals and what we imagine they are thinking or doing (for our amusement). They are wise, flawed, scared, courageous, loving, vicious…everything people are and then some. There are a lot of characters in this book and there are many POV shifts. Some may find it distracting, but I didn’t really mind. Recommend for Middle-Graders on up, although it is a bit on the longish side. I’m in my 40’s and really liked it.

The Hunt for Elsewhere by Beatrice Vine is the story of animals (mostly a fox, a crow, and later a wolf) all who have human traits and qualities, yet live the lives of wild animals. It is an interesting technique, and one that has been done before, I’m sure, but Ms. Vine created a story that was, at least to me, wholly original. I was surprised at how unpredictable it was, like when I thought it would be all about Saxton reuniting with his family (which would happen at the end of his journey), I was wrong. And I was wrong about Quill’s fate. It was this unpredictability that kept me engaged throughout and I appreciated the risks that the author had her characters take. All in all an enjoyable book, one I’d say is suitable for ages 13+.

Beatrice Vine’s “The Hunt for Elsewhere” is rich with evocative and atmospheric writing. Great amount of descriptions and details to really make the reader feel they are there as the story unfolds. The main characters are anthropomorphized animals, which will greatly appeal to younger readers. But they have experiences and adventures that will appeal to the older folk as well. There are a few parts that are a bit “circle of life”, but if the child can handle “Old Yeller” or “Where the Red Fern Grows” he or she can handle this. One thing I particularly liked was the way that the crow (Quill) would impart words of wisdom to Saxton that would be educational to the young readers, but without feeling “teachy”. Little things like directions, weather, position of states, even proper English. Highly recommended to those who enjoy a different take on a coming of age adventure story.

I began reading The Hunt For Elsewhere thinking that it was going to be a children's fantasy story - cute, sweet, funny, and filled with adorable animals somewhat akin to Bambi. What I found instead was pleasantly surprising, emotionally gripping, and a fascinating read, though it was a bit strong for young children.

I loved the unique and genuine personalities that each of Beatrice Vine's characters have in this book. She brings us into a world of predator and prey, where animals must often kill not only for food, but for survival and protection, and they must teach their young to be selfish, ruthless, and just as deadly as their forbears. But when a young fox named Saxton starts learning that there might be a bit more to the world around him than cold-hearted ruthlessness, a series of events unfold that set him on a path to change many lives for the better, and some for the worse. At times, this story is playful, fun, and maybe even a bit cute, and at times it is heart wrenching, brutal, and as violent as one would expect in a real depiction of animal interaction.

Nearly all good books I can think of have aspects that are easy to be critical of, but upon finishing this tale, I can't think of much that I would change. If had written a work like this, I would have struggled, if not completely failed, to make it through some of the heartbreaking moments in these pages - but for this, I commend Beatrice Vine for her bravery in taking on such raw and difficult content, and for seeing the story through in spite of its painfulness. I might not have created animal characters that were as human-like, or brought quite so much realism to their natures - but again, this is a feature that brought me to understand and empathize with the characters on a level that I probably wouldn't have otherwise reached.

To sum it up, The Hunt For Elsewhere is a well written, well rounded, and emotionally gripping tale that I'm glad to have experienced, especially since it's outside of the realms that I might normally have chosen to explore.

In my humble estimation, this book rates five stars without reservations, and it has left me hoping to read more from Beatrice Vine in the near future.

You have subscribed to alerts for Beatrice Vine.

You have been added to Beatrice Vine's favorite list.

You can also sign-up to receive email notifications whenever Beatrice Vine releases a new book.