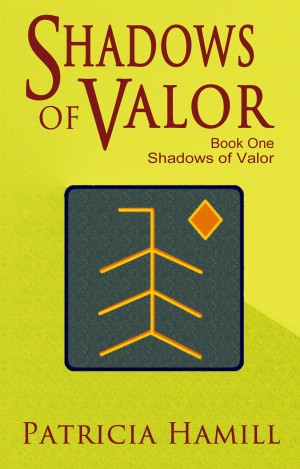 By Patricia Hamill
Rated 4.00/5 based on 4 reviews
Seventeen and intent on vengeance for the death of his father, Edwin runs away from home to join the Orescan Army. Soon, he finds himself a Probationary Recruit, not in the Army, but in the Special Air Corps. Through a combination of natural and technologically enhanced gifts, this elite and secretive organization battles the Verackans from the shadows. More
Four years ago, Edwin's father was slain by Verackan raiders, intent on plundering the Orescan heartland to supplement their own waning resources.

Now seventeen and intent on vengeance, Edwin runs away from home to join the Orescan Army. Soon, he finds himself a Probationary Recruit, not in the Army, but in the Special Air Corps. Through a combination of natural and technologically enhanced gifts, this elite and secretive organization battles the Verackans from the shadows.

I like reading and writing books, crocheting, running, and practicing karate.

I'm also into science (fact and fiction) and love movies and stories that feature it. Doctor Who, Star Wars, Star Trek (still playing on BBC America!), The Expanse, The Walking Dead, I love to watch all of these, though they're just some of the things I watch.

Check out my blog, I read too much!, and also the blog at Puretextuality.com to which I contribute. My favorite genres in books are sci-fi, fantasy, and humorous nonsense in various forms, but I do branch out.

As for what I write, I can't be pinned down to a single genre. My first book, The Golden Ship, I wrote with and for my mom. My sci-fi trilogy, Shadows of Valor, will always be my favorite because it's exactly the sort of thing I like to read: boy leaves home, discovers superpower, meets girl, saves the day.

To get out of my comfort zone and to cure my tendency to hide in the other room when The Walking Dead came on, I wrote a zombie book, Fearless. It's not nearly as gory as The Walking Dead, but it's got a lot of me in it. I think it's the most emotionally gripping, grown up book I've written so far.

The Freeze, my foray into pure YA-post apocalyptic was a lot of fun to write. There's a bit of danger and romance, but it doesn't get too deep. Just a fun story to tell, and hopefully fun to read as well.

As such an avid reader of fantasy, it actually took me rather long to get around to trying my hand at writing one. I wrote Avalee and the Dragon with the full intent at making it a girl defeats dragon fantasy. It turned into a surprise romance for everyone involved, including me. Anyway, good stuff.

All that being said, I love connecting with readers and other authors. Feel free to send me a note on Goodreads or my Facebook page.

Also in Series: Shadows of Valor

(I received a free copy of this book from the author in exchange for a review).

(This review may contain spoilers).

I felt that this book was a particularly easy, quick read with two main characters who were fairly interesting and likable. However, I'm afraid I can't quite give this book four stars.

Apart from a few exceptions, I did feel that a lot of the characters weren't really explored as much as they could have been. Almost all of the recruits working alongside Edwin weren't detailed enough - I struggled even to relate to Turner and Tully. By the end of the book, I didn't know them well enough to be worried about them, or to see one of the situations coming (though I wasn't actually surprised by one of the events).

I did like Edwin's character. He was well-written and I felt that he had to face realistic consequences for leaving home, which made him much more interesting as a character. I have to say, though, I didn't quite find how skilled he became so quickly very believable. Whether or not he had enhancements, it still didn't really enable my suspension of disbelief.

I did feel that the book really pulled my attention in during the mission scene at the end. It was a good way of showing off how Edwin had gained in skill, as well as how he handled himself in dangerous situations. However (and I noticed this a few times), the story did suddenly skip to the mission, without any explanation as to how Edwin and the others were picked and why. For a lot of the book, I felt that long periods of time were skipped over, which left me feeling I was missing a lot of the character development that could have gone on.

I did like the friendship between Peggy and Edwin, but I was a bit disappointed that there seemed to be a romance blossoming. However, I was pleased to see that there wasn't any insta!love going on. I would have liked to see more than just that short scene towards the end of the book to give me more of a background to the bad guys - and I was a bit disappointed about how easy Edwin found it to make the choice he did.

I do have the second book on my Kindle and I will be reading it - not next, but after the following book I've got lined up.

The author was very detailed in describing the surroundings I guess because it's futuristic. Good because I can visualize it in my mind. The characters..hmm i was looking into a more specific description of Edwin.
The story is smooth. You'll have no idea on what will happen next..makes you curious more and more.

For the succeeding chapters the story became fast phased, from being a probationary recruit now Edwin's gifts were challenged by the situation on their first mission with his Lt. Peggy Bryce. This is where the intense actions were. With the Author's great description of what was happening describing in full details of what Edwin was doing and how it blends with the story is really great.

I will definitely wait for the next book.

The copy was given to me by the Author herself for an honest book review and opinion.

(reviewed the day of purchase)
Lauryn Kelly reviewed on March 27, 2013

I quite enjoyed this book. I liked the setting, the characters, but I especially loved Edwin's ability. It fascinated me to no end. The author described it very well, allowing the reader to visualize it easily. I do wish there was a bit more physical description, world building, and more back story as to why there was a war, but considering how one of the last chapters reads, I'm sure future books will expand on that. Though for most of the book things aren't very suspenseful for a city being at war, it's understandable since Edwin was in training. The last third of the novel makes up for it, showing this series' potential.
My only real complaint is the cover. Many people might pass this by based on looks alone. This book deserves a great, eye-catching doorway to Edwin's world. If the author would consider investing in one, I believe more people would be drawn to this intriguing story.
I eagerly look forward to Edwin's future missions and where his gift takes him.

This is a pretty quick read, as Hamill's writing moves very fast. I enjoyed the overall story, although the beginning didn't articulate the conflict between Orescan vs. Verackan in a relate-able way. I suppose it makes sense, as the main character is basically a boy, and you wouldn't expect a deep understanding of the cultural events that would make such a war happen. I'd have preferred to learn more about the causes of the war, the political structures that govern peoples lives, as part of the worldbuilding.

Hamill creates vivid and engaging scenes and locales, but I can't help thinking that it would be a much richer work if she'd spent more time with her people. The story, especially at the beginning, felt a bit black and white, and by the time she had added some more nuanced elements to the ways people live in that world, it felt a bit rushed.

Her characterizations are very crisp and targeted. Edwin, our hero, is very well fleshed out and likable. His companions are entertaining, although I could have done without a romance angle. There were spots it seemed like that subplot was intruding on the "actual" story. I would have loved to have spent more time with the rest of his fellow recruits or operatives, to have more of a sense of camaraderie, rather than focusing on the romantic subplot.

All of that is nitpicks. It's reasonably well edited, well written, and generally engaging. I'll happily read more with these characters, come book 2.

Note: The author provided my copy in exchange for this honest, non-reciprocal review.

You have subscribed to alerts for Patricia Hamill.

You have been added to Patricia Hamill's favorite list.

You can also sign-up to receive email notifications whenever Patricia Hamill releases a new book.