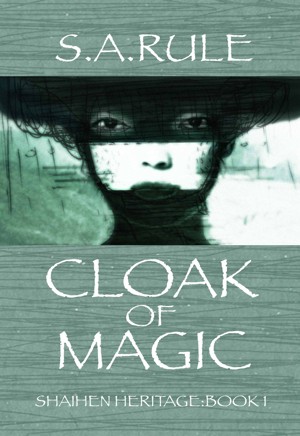 By S.A. Rule
Somewhere along the line where human nature meets human imagination, myths are created. Somewhere in that space lives the spirit that created and sustains Shehaios, the Fair Land.
One man embodies the spirit. A man all too susceptible to the human flaws which lie beneath the cloak of magic.
"...a book of satisfying depth featuring characters worthy of empathy and a story that weaves and turns."
Available ebook formats: epub mobi pdf rtf lrf pdb txt html
First 50% Sample: epub mobi (Kindle) lrf more Online Reader
pdb
Price: $2.99 USD
Buy Add to Library Give as a Gift
How gifting works
Create Widget
Tags: magic fanasy low fantasy historical fantasy folklore
About S.A. Rule

Sue Rule lives in Kent, in south east England. As well as being an author, she is a songwriter and musician: one quarter of local family folk group Pig’s Ear. http://www.pigs-sty.com

She has been writing bits of the fictional history of Shehaios since she first dreamed up the world and its rather prosaic magic in the early 1970’s. The intervening years spent learning and perfecting her craft have culminated in the “Shaihen Heritage” series. The series grows out of Sue’s love of history and folklore, and tracks the fictional history of an imagined world which is not unlike our own. One or two little accidents of evolutionary history make all the difference – there are dragons in the mountains, and in every generation of the Shaihen people there is one individual with the gifts of a Magician.

Discover your Shaihen Heritage
“The image of a dream is the only wealth we’ll ever have.” Through a series of complex and entertaining novels a host of engaging characters collaborate and compete with each other to spread the dream of "she-haios", the Fair Land. This is a book trailer for the powerful and challenging fantasy series Shaihen Heritage by S.A. Rule: Cloak of Magic, Staff of Power, and Spirit of Shehaios. The music is An Droichead - The Bridge - by Liam O'Flynn.

You have subscribed to alerts for S.A. Rule.

You have been added to S.A. Rule's favorite list.

You can also sign-up to receive email notifications whenever S.A. Rule releases a new book.