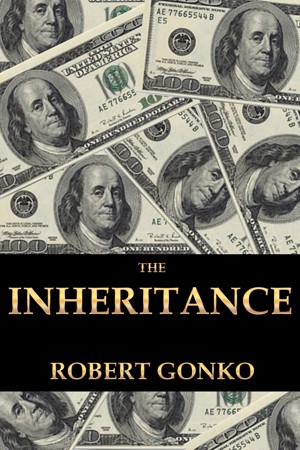 By Robert Gonko
Sam Harman has just inherited three billion dollars, thrusting him into a dangerous world of money, power, intrigue and murder. How will Sam and his family survive? More
Sam Harman is a decent guy, working hard and raising a family. One day he learns that his recently-deceased biological father was one of the richest men in America. Now Sam is a billionaire and part owner of a huge corporation.
The quick trip to Easy Street becomes a deadly journey into a world of money, power, intrigue and murder. Who are his enemies? Who are his friends? Will he survive? What will happen to him becuase of 'The Inheritance?'
Download: epub mobi (Kindle) pdf more Online Reader
rtf lrf pdb txt
Price: Free! USD
Add to Library
Create Widget
Tags: suspense wealth
About Robert Gonko

Robert became a fan of thrillers as a teenager when he discovered Clive Cussler&#39;s Dirk Pitt series. These works, and others, inspired him to start writing his own books and a life-long dream was born. He first created his central characters Steve Bennett and Amanda Clark in college, though it would be many years before he hit on the right stories for them.

In his early forties he conceived the Port Mason series, stories set in and featuring a fictional city &#39;somewhere in America&#39; that he describes as inspired by St. Louis and Portland (Oregon) with a strong dose of Chicago-style politics and corruption to keep things interesting.

Robert was born and raised in Illinois, where he lives with his wife, Angela, and their children, Josie and Jimmy.

Reviews of The Inheritance by Robert Gonko

You have subscribed to alerts for Robert Gonko.

You have been added to Robert Gonko's favorite list.

You can also sign-up to receive email notifications whenever Robert Gonko releases a new book.