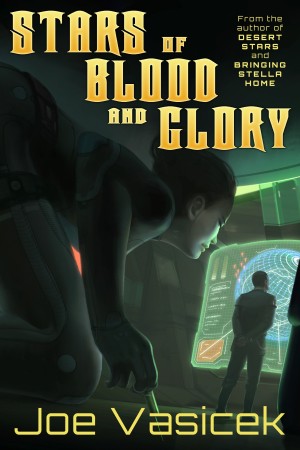 Stars of Blood and Glory

By Joe Vasicek
As the Hameji Empire and the last of the free stars face off for a final showdown, Danica and her band of Tajji mercenaries must rescue a runaway princess before the son of Sholpan makes her his slave. More
THE ONLY HOPE FOR THE LAST FREE STARS NOW LIES ON THE PATH OF BLOOD AND GLORY.

The princess of Shinihon could not have picked a worse time to run away. The largest Hameji battle fleet ever assembled threatens to overrun the last of the free stars. To make matters worse, a rogue assassin from an unknown faction has killed the high admiral of the Federation. Without clear leadership, the war may be lost before she can be found.

But Danica Nova and her band of Tajji mercenaries are no strangers to lost causes. They've fought the Hameji before, and they'll fight them again—not for honor, or for glory, but simply for the pay. War has been their way of life ever since the diaspora from the homeworld.

Master Sergeant Roman Krikoryan is one of the few remaining mercenaries still old enough to remember the homeworld. But he's an old cyborg, and his humanity is fading. Death is a mercy he doesn't expect to find on this mission.

They aren't the only ones after the princess, however. Hungry for glory and eager to make a name for himself, Sholpan's son Abaqa seeks to make the girl his slave. Though only a boy, he'll stop at nothing to prove himself to his Hameji brethren.

With the Federation in disarray, the bloody end of the war may come too soon for some of them. But one thing is certain—not all of them will live to see it.
Available ebook formats: epub mobi pdf lrf pdb html
First 20% Sample: mobi (Kindle) lrf pdb Online Reader
Price: $4.99
$2.49 USD
Buy with coupon Use the code EBW50 at checkout for 50% off
(Offer good through March 13, 2021 )
Have a better coupon?
Add to cart, then apply your coupon
Add to Library Give as a Gift (using coupon)
Have a better coupon?
Add to cart for gifting, then apply your coupon
How gifting works
Create Widget
Tags: adventure mercenaries space opera princess empire marine fleet science fantasy space barbarians far future
About Joe Vasicek

Reviews of Stars of Blood and Glory by Joe Vasicek