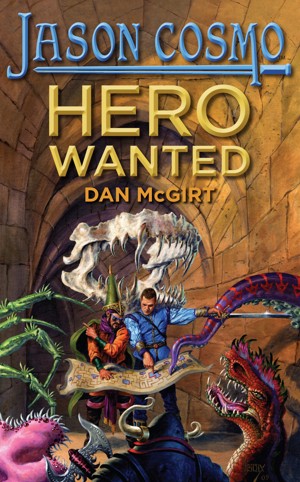 By Dan McGirt
Rated 4.75/5 based on 24 reviews
A rollicking fantasy romp across the Eleven Kingdoms with reluctant hero Jason Cosmo and cynical wizard Mercury Boltblaster. Forced to flee his home in Lower Hicksnittle and pursued by bounty hunters, demons, and the sinister Dark Magic Society, Jason goes from the bright realm of The Gods to the depths of the Incredibly Dark Forest to learn the awful truth behind the price on his head. More
A simple woodcutter learns there is a ten million carat price on his head. Every bounty hunter in the Eleven Kingdoms is on his trail. The Dark Magic Society want him dead. The Gods want him to save the world. Jason Cosmo just wants to get through this alive.

Jason Cosmo is perfectly happy living in the humble village of Lower Hicksnittle—until a foppish stranger tries to kill him, claiming there is a huge price on Jason's head. A price big enough to put the world of Arden’s best—and worst—bounty hunters on his trail. Overnight, Jason has become the most feared man in the Eleven Kingdoms—which is news to him!

On the run from mercenaries, Demon Lords, and the full might of the sinister Dark Magic Society, Jason teams up with cynical wizard Mercury Boltblaster and winsome twins Sapphrina and Rubis to learn the truth.

Driven inexorably onward by the Laws of Narrative, Jason's quest takes him from the bright realm of The Gods to the deadly depths of the Incredibly Dark Forest—and into a final confrontation with the forces of evil!

Followed by an even more final confrontation. And then an obligatory wrapping-up-loose-ends scene.

If he lives that long...

"Energetic fantasy adventure ... McGirt seems prepared to stoop to the lowest literary levels to set up a joke...gleefully employs coincidence, improbability, and a downright flouting of the laws of narrative.”
— Publishers Weekly

“Read this book! ... If the point of a book is to entertain, then McGirt’s rollicking fantasy is flawless. It is a witty, humorous, reluctant-hero-saves-world-gets-girl romp with a dash of jaded crabby wizard thrown in...” —P.A. Seasholtz, author of the Fayersae Histories

Dan McGirt is the author of the Jason Cosmo fantasy adventure series, the Jack Scarlet action-adventure series, Sarah Palin: Vampire Hunter and assorted other tales, some sordid, most not. His most recent story is Glass Darkly & The Skull in the Box, an occult mystery short story.

Great read! I love the brushes with the 4th wall. The characters aren't completely aware of being fictonal but still toy with the boundaries of the story. Most impressive to me is the original release date '89- and still the jokes have a perfect timing and are feeling fresh. The dialogues contain enough wit to read them - laugh- reread them and laugh about them again :)
Highly recommended!

This was a really nice, long funny read.

Awesome fantasy book I have ever reader. Very nice, very funny! It's like watching a movie. Highly recommend

So ridiculous its got to be a classic, chuckled my way through from start to finish and still chuckling. Got everything a good family film needs so why isn't it?

Loved it so much I read it straight through in a day. Great humorous dialog and wit abound. Highly recommended for anyone in search of a fun humor filled fantasy adventure.

It's refreshing to find a book with conversations between characters that flow nicely and actually feel like real conversations.

Dan McGirt has created a most interesting reluctant hero. I also smell a bit of Kieth Laumer's influence in his writing, especially his place names.

I was quite entertained by Jason's journey when he's dragged from his beloved home in Lower Hicksnittle (featuring the Festering Wart tavern and yes the town is exactly like it sounds) through the Eleven Kingdoms to do battle with various dastards and other villains. The only problem is, Jason has no fighting skills; he's just a farmer and wood chopper.

The story is a combination of good laughs told tongue in cheek and high adventure.

(reviewed 2 years after purchase)
Scott Abbott reviewed on May 14, 2012

A perfectly charming story. It takes all the fantasy hero tropes and stomps all over them with a lovingly mocking fashion. You're in for a laugh.

It is a parody. Humorous, up to certain levels. But that's all. The plot is generic: a hero, grown as nobody, had hidden legacies, out to save the world. And don't forget the Gods vs Devils and/or good vs evil, with humanity stuck in the middle of it! Everything else were just parodies, either from our world (coffee shop and myriad of others), or from others famous fictions (like the magic carpet). Anyone with a good literary skill and wide imaginations could do it.

Actually, I'm just not in a mood for this. Another times, I'll probably love it. If you're not in an anti-parodies mood, you'll probably loves it too. And if someone told you the book is hilarious, or something similar, believe her/him. And lastly, I have not seen similar thing, satirical-fantasy fiction, in the book form. Hence, the perfect rating.

You have subscribed to alerts for Dan McGirt.

You have been added to Dan McGirt's favorite list.

You can also sign-up to receive email notifications whenever Dan McGirt releases a new book.