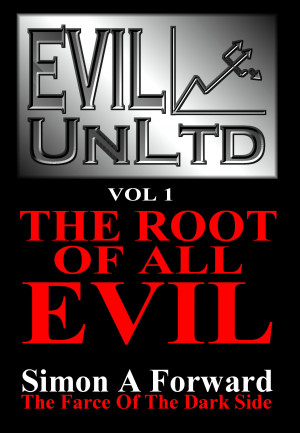 Evil UnLtd: The Root Of All Evil

Rated 4.50/5 based on 2 reviews
The Farce Of The Dark Side. Villains are the new Heroes in this Epic SF Adventure.

Supreme genius, Dexter Snide, has floated Evil on the stockmarket and, with his criminal colleagues, sets out to ensure Evil shows a consistent profit.

What begins as a heist to steal the greatest prize in the galaxy, draws Evil UnLtd into a plot to crash their enterprise before it can reach its warped potential

Born in Penzance in 1967. From the age of about three I was probably dreaming of writing for Doctor Who. Certainly it wasn't a case of just watching it: I'd go to bed with all sorts of adventures and story possibilities buzzing around in my head. From the age of eleven, I knew, whenever any aunts and uncles asked the "What do you want to do when you grow up?" question, the stock replies of jet pilot, train driver, astronaut were never going to be good enough for me. "I want to be a writer", I always said. And, what do you know, I am.

Author of several works of licensed fiction, including Doctor Who novels, and novelisations for the BBC's Merlin series, I'm now primarily focused on promoting and developing my own original works, ranging from adult sf, through kids' and Young Adult fiction, as well as books that are downright Evil...

With a new spin on the “value” of evil, super-villain extraordinaire, Dexter Snide, has crafted the perfect plan to take over the universe and make millions by cashing in on Evil itself! With the assistance of his hand picked crew of truly wicked side-kicks, Dexter sets his plan in motion. But even for the craftiest of super-villains with the most fool-proof of plans, success does not always come easy. The minds and muscle (oh yes, and robot and monstrous hatchling) behind Evil Unltd must face the forces of good… and lesser evil… that threaten to stand in the way of the ultimate prize. Beefcake (and essentially indestructible) action hero Rolph Stengun plagues Dexter and his crew from start to finish as they progress through Dexter’s master plan. One disaster after another, it seems that Dexter’s evil plot may not come to full fruition - but let that be a lesson to puny minds everywhere… there is no thwarting an evil genius like Dexter Snide, who rolls with the punches (literally at times) and stops at nothing to bring Evil Unltd to each and every home in the Universe!

Author, Simon Forward, has a remarkable way with words, putting threads of descriptors together that spin a silky web of impeccable detail that will both amaze and stimulate the imagination.

Excerpt from the book: Ferret stared with wider eyes than any fuller-lash mascara could have afforded him. The undeniably imposing bulk of the Hatchling was framed by the circular maw of the beast thundering towards them. That gaping crater-like mouth was rimmed with contra-rotating arrays of scythe-like teeth. It was a giant, dentally-empowered steel worm.

It’s not only the brilliant use of description that keep the reader’s attention. Forward has a well-developed sense of humor and does not shy away from keeping the tone of the book light-hearted to down right hysterical, even during the most absurd encounters. Clever word-play and the occasional well-placed pun will leave your cheeks sore from smiling. It truly is the charm of the entire Evil Unltd concept.

The only “complaint” I have about this book (and it’s a mild one at that) is that there are a handful of instances where a scene seems to drag on with a little too much (seemingly unnecessary) detail or character thoughts, but these passages are few and far between. Forward quickly regains the pace of the book with the next sweep of action and those temporary lags are soon forgotten.

That being said, I highly recommend this carefully-crafted, clever and imaginative saga to anyone who loves a good laugh and especially to those who have an appreciation of sci-fi/action/comedy genius.

*Fair warning to readers, this is an adult book and there is some mild use of language and a few sexual allusions, but hardly anything that would shock or offend in this day and age of “adult content” standards.

Evil UnLtd: The Root of All Evil is a genius space farce. Dexter Snide and his associates bumble their way through a series of (mis)adventures with a view to accumulating as much power, notoriety and wealth as they can. It is a wickedly funny, extremely well-written sci fi comedy that reads like a mash-up of Douglas Adams meets the TV sit-com, Red Dwarf, and one of my favourite sci fi tribute films, Galaxy Quest. It’s literate sci fi, chock full of humour and word play with some lovely nods to the genre and a wonderfully fitting cast of characters. Happily, as you’ll also no doubt have noticed, The Root of All Evil is only Part 1 in the Evil UnLtd series and Simon is currently working on Evil: Part 2. This makes me excessively happy, as I can’t wait to rejoin this band of villains on their next scrapes as they chase Evil domination of the Universe. I suggest you beam the first volume down to your eReader and buckle up for the ride. It’s great fun being Evil.

You have subscribed to alerts for Simon Forward.

You have been added to Simon Forward's favorite list.

You can also sign-up to receive email notifications whenever Simon Forward releases a new book.