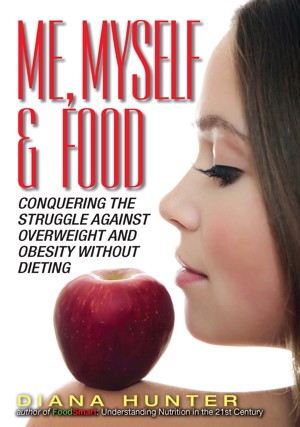 Me, Myself & Food: Conquering The Struggle Against Overweight And Obesity Without Dieting

Topics covered include (per back cover copy):

• The real tools you need to lose and maintain weight—and how to use them effectively.
• A smarter way to use your willpower.
• Why diets fail—and how to avoid the diet trap.
• What you really need to know about nutrition to get and stay slim.
• Easy strategies for managing social and on-the-go eating.
• Ten proven tips for effective, beat-the-system food shopping.
• The inside scoop about food advertising.
• Why diet and exercise is such a winning team.
• How to be a lean machine for life.

Diana Hunter is an award-winning author, nutrition researcher, and college instructor who holds a degree in food science. Her background includes certification in food safety and management as well as studies and awards in the behavioral sciences.

Her previous literary achievements include FoodSmart: Understanding Nutrition in the 21st Century and The Ritalin-Free Child: Managing Hyperactivity & Attention Deficits Without Drugs, a Parents' Choice Approval Award winner. She has been seen and heard on hundreds of network stations throughout the country as part of her acclaimed "Be FoodSmart" National Tour, and has presented at numerous colleges, universities, bookstores, libraries, and nutrition-related venues. Founder of the FoodSmart Alliance, she is also the developer of FoodSmart Nutrition, a course currently offered at various colleges.

Ms. Hunter's goal is to help educate others about nutrition and health on a global scale, with a focus on helping those with weight issues and debilitating illnesses. She is a firm believer in the idea that health reform, rather than healthcare reform, will lead to a healthier society, and that preventive care is the key to achieving it.

Great book outlining what your body needs to operate properly. Quick read with many great ideas and lists of tips.

You have subscribed to alerts for Diana Hunter.

You have been added to Diana Hunter's favorite list.

You can also sign-up to receive email notifications whenever Diana Hunter releases a new book.