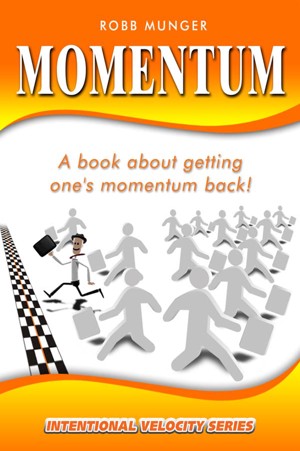 Momentum- Getting One's Momentum Back

By Robert Munger
Intentional Velocity™ is the result of author Robb Munger listening to successful people around the world and dissecting programs and systems to see what key items work best in accomplishing
great feats.
"Momentum" shows us how to be intentional and thoughtful toward creating action in the things we desire to have for our lives. It is a unique approach to guide us into getting to the next level.

Robb Munger grew up on a small lake in Michigan and went to school at a small country school house. His parents always encouraged him to dream big and make big plans. He went on to a traditional Southern Military College where he graduated and was commissioned in the Army. As a military officer he excelled and achieved the highest awards available while serving during peace time.

He married his love at first sight sweetheart who he has been married to for over 20 years and has four children. Robb has always had a passion for business and encouraging others. Robb grew his land development business to be listed as one of the largest companies in Michigan. He also developed and sold a multi-million dollar finance business in 2003. He is a true entrepreneur at heart.

As his passion has been more focused on helping others he then focused on teaching and writing. Robb was on the Board of Directors for one of Michigan’s largest homeless shelter’s when the executive director resigned and he was asked to step in and take over operations. With no real experience in the non-profit world he was forced to learn quickly to insure the sustainability of the mission in these tough financial times. Within nine months he was able to pay off hundreds of thousands of dollars of debt and increase the profit and loss to over 6,400%. He taught and encouraged the staff and clients on Intentional Velocity for their live.

Robb is now the CEO of the Exodus Place in Grand Rapids, Michigan which is designed for positive structured housing and being a conduit for jobs for men that want a hand up and not a hand out. Once again Robb has developed a team from his system that is now setting records for the expansion and success of this new program.

Robb is currently doing interviews on local and national radio stations, TV
stations, and newspapers regarding his book called Momentum. He has chosen to work with the men that live in the Exodus Place to create this
national media blitz in which they are the ones setting up the interviews and
applying Intentional Velocity.

You have subscribed to alerts for Robert Munger.

You have been added to Robert Munger's favorite list.

You can also sign-up to receive email notifications whenever Robert Munger releases a new book.