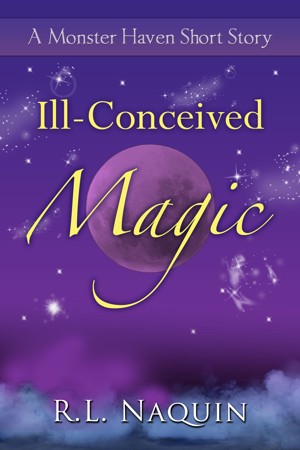 Rated 4.60/5 based on 5 reviews
Empath and caretaker to monsters, Zoey Donovan, finds a package on her front lawn. It cries a lot and wears diapers. It also has horns, cloven hooves, and green skin.

Zoey and Maurice the closet monster look for the unlikely parents in a crazy attempt to bring together the mismatched family. A dangerous prospect, considering the family's hostile relatives. More
Empath and caretaker to monsters, Zoey Donovan, finds a package on her front lawn. It cries a lot and wears diapers. It also has horns, cloven hooves, and green skin.

Zoey and Maurice the closet monster look for the unlikely parents in a crazy attempt to bring together the mismatched family. A dangerous prospect, considering the family's hostile relatives.

Ill-Conceived Magic is a short story in the same world as the Monster Haven novels from Carina Press. It also includes a bonus first chapter of Pooka in My Pantry.

This story can be enjoyed without having read the novels. However, it fits chronologically between book one, Monster in My Closet, and book two, Pooka in My Pantry. Books one and two are available everywhere great digital books are sold.

R.L. is the author of the Monster Haven series, The Djinn Haven series, and the Mt. Olympus Employment Agency series. Her stories often drop average people into magical situations with the mundane world as a backdrop. She fills her work with heart, quirky humor, and sometimes darkness the characters need to overcome in order to find the light.

Rachel believes in pixie dust, the power of love, good cheese, lucky socks, and putting things off until the last minute. Her home is Disneyland, despite her current location in Kansas. She has one husband, two grown kids, and a crazy-catlady starter kit. If she’s found wandering around lost, please return her to her desk. She probably has a deadline looming and got distracted by a dinosaur eating pancakes.

Having been surprised at how funny Monster in my Closet was, I couldn't wait to get onto this short story which I picked up free last year, to see what Zoey and Maurice did next.

For a short story, this had everything-paranormal action, lots of laughs and a big pile of Maurice! What else could you want? The fun comes in the form of Maurice and Phil doing karaoke to the Titanic theme with Phil of course using words that make sense only to him! I couldn't stop laughing! Instead of 'near, far, wherever you are' from Maurice, we got from Phil 'yawn, stew, forget my old shoe'. Very funny. Phil's guide to nappy changing was amusing as well. I was also amused in a sick way by the initial slimy introductions from the satyrs until they got nasty.

We also get the serious side, exploring the friendship between Zoey and Maurice, asking the question of can you accept friends for who they are, even if they have a side you don't like much? Poor Maurice really goes through hell on this journey, trying to keep her safe and fearing that he might lose her friendship. The story also explores the relationship between two enemy races and the prejudice that the resulting baby has to face from both sides, which I found pretty poignant.

Overall this was a great addition to the series and I really liked it. I recommend this series to fans of paranormal cozy mysteries and light urban fantasy.

A cute short story in the Monster Haven series. Totally accessible to those who have not read any of the series yet.

What do you do when a baby is left on your doorstep? Normally, you would call the Police. That’s not an option for Zoey Donovan. Zoey is an Aegis, the protector and caretaker of the Hidden (magical creatures), and the baby sitting on her doorstep is definitely not human. Unless human babies started having sage skin and olive hair, complete with goat legs and two tiny horns . So, what to do?
The hunt is on for the little baby girls parents. Only when you’re trying to locate a beautiful little mixed girl parents, when both parties Family hates each other…. You’re into more trouble than planned for.
This is a sweet and cute little short story set in the world of the Monster Haven Series, right after Monster in My Closet. We see Zoey and Maurice wander off on their own little adventure, trying to find the parents to the little girl found on Zoey’s doorstep. But it isn’t as easy as one would think. The dryads will not accept her and the Satyrs… well, they’re being Satyrns. I’m still having nightmares about the chase in the woods!! O_O I totally blame you Rachel!
I enjoyed Ill-conceived Magic. It’s a beautiful tale about love and what it can overcome… and transmonsterification. :-) It gives us a few surprises, and it fits perfectly into the rest of the series.

ENJOY! I know I did.

One of the books I’ve read last year that went directly in my 2012 Top 5 was Monster in My Closet, written by R.L. Naquin. It’s probably the cutest story I’ve ever read and Maurice, one of the main characters is surely the sweetest hero I’ve met. You can imagine my enthusiasm when I found out that in addition to the second book in the series (soon to be published), the author also published a short story, situated between the first and the second book.

The meeting with Zoey, Maurice and the rest of the incredible characters brought me a huge smile on my face from the first second, smile that remained there even after I finished the last page.

This short story offers us a chance to see Zoey in a new monster saving mission. From the moment Maurice, the monster from the closet that she thought was just a product of her imagination proves to be as real as she is, Zoey’s life changes. She already knew that her ability to feel everybody’s emotions at the highest degree was not that normal. But Maurice offered her the chance to discover a new world that she didn’t know it existed. The monsters in the closets, the gargoyles, the fairies and all the other magic beings she thought were imaginary are very, very real. And the combination between the fact that she now knows about them, that she’s an empath and that her own mother was a protector for these creatures is leading to only one direction: Zoey herself becomes a protector for the needy magical beings. And her fame seems to grow stronger. Already having in her house a closet monster and a gargoyle – both of them divorced and homeless, an abused family of brownies (some kind of tiny fairies) and a skunk-ape that protects her home, Zoey discovers that her future is still full of surprises. After finding a mysterious package on the front lawn, the heroine finds herself in a race where she’ll have to solve some mysteries, get rid of a group of satyrs and a furious dryad and reunite a split family. Meanwhile, she makes a shocking discovery about her friend Maurice and their relation seems to be breaking. She’s the only one who could save it, but only if she can ignore her own confusion.

If I didn’t make you curious enough, I’ll just tell you again and again that Maurice is one of the loveliest heroes I’ve ever met! You just have to meet him!

The story is written in the same funny style, but full of surprising realistic shades, that we discovered in the first book, Monster in My Closet. Despite their fantastic features, the characters have real problems, they act in a disarming honestly way and the whole sensation is that you just took a look in a normal house, where the members are simply living normal lives. Of course, the difference would be that the characters are anything but normal and apart from their everyday problems, they also have some issues more difficult than you could ever imagine.

I highly recommend R.L. Naquin’s series! Despite the fact that there is a huge amount of fantasy and paranormal books written in the last few years, I think this author is slipping pure magic in her books and so, the story she managed to create has something truly special.

The short story can be read for free. You can download it from Smashwords. Of course, it can be read as a stand-alone, but I would recommend you to read Monster in My Closet first, otherwise you could miss some of the story’s enchantment or the characters’ charm. I don’t usually recommend books with such passion. This is because our preferences might be different, so something I loved in a book could be something you despise. But in this case, I’m 99% sure that you won’t regret your purchase and that you’ll have a wonderful time reading the Monster Haven series.

"Ill-Conceived Magic" is a charming short story that takes place in Naquin's "Monster Haven" world. Zoey, the empath, is still coming to grips with the Hidden world she has discovered all around her. As if having a closet monster in her home, along with his brother-in-law Phil (a gargoyle), wasn't enough, now someone has dropped more trouble on her doorstep -- literally.

Serving as a bridge between Monster in My Closet (book 1) and the upcoming Pooka in My Pantry (book 2), this short story is a delightful return to the world I fell in love with. Zoey and Maurice the closet monster return, but we are also treated to new creatures in this story too.

"Ill-Conceived Magic" a great read for fans of the Monster Haven series, and those new to the series will enjoy it too.

You have subscribed to alerts for R.L. Naquin.

You have been added to R.L. Naquin's favorite list.

You can also sign-up to receive email notifications whenever R.L. Naquin releases a new book.