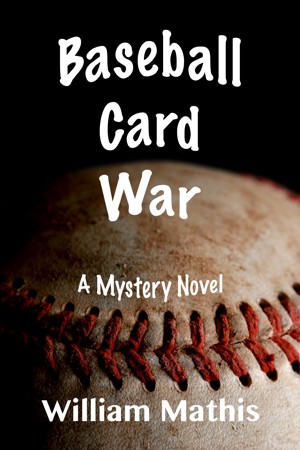 By William Mathis
Private detective Derek Sprye slowly gets sucked into a serial murder case without realizing he's at risk of being killed. The blatant clues the assassin leaves could have multiple meanings, though the victims are all men who gamble using baseball cards. While investigators are confused, perhaps the killer is as well. Is he making tragic mistakes while vengefully hunting a man who is already dead?

William Mathis was born in Chattanooga and grew up near the two major battlefields featured in Chickamauga Dreaming: A Novel on the Civil War's Enduring Impact.

Although he moved to British Columbia after marrying a Canadian, the author's continuing fascination with the complex historical and geographical character of Chattanooga resonates in his novel. The numerous monuments and markers that visibly reflect the Chattanooga area's heritage inspired Mathis to probe the psychological and emotional connections between the modern South and the Civil War.

His second novel, Baseball Card War, is a mystery also set in Chattanooga. The new novel features some of the same characters that appear in Chickamauga Dreaming. They are years older and still under the influence of the Civil War, but taking on a new challenge to help solve a serial murder case in modern-day Chattanooga.

Most of the stories in the Love and Deceit collection are also set in the South, reflecting the author's attachment to people and places there.

You have subscribed to alerts for William Mathis.

You have been added to William Mathis's favorite list.

You can also sign-up to receive email notifications whenever William Mathis releases a new book.