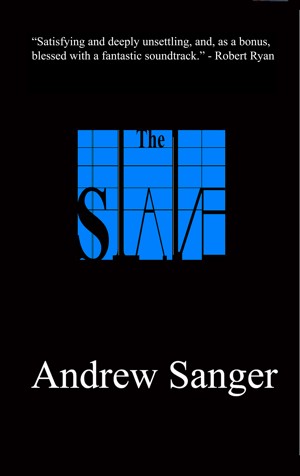 "A satisfying and deeply unsettling novel... and, as a bonus, blessed with a fantastic soundtrack." - Robert Ryan (www.robert-ryan.net).
* * *
Set in the London suburb of Golders Green, The Slave is the story of a young man who risks everything to free a woman from forced prostitution - and the dilemma faced by a respectable older neighbour he turns to for help. More
A man goes to a prostitute and pays for thirty minutes of her time. But she lets him know she's a captive, a prisoner. What should he do? Go to the police?

He would be arrested. He has committed a serious crime: paying for sex with a trafficked woman, a 'controlled' woman. Besides, the police could not free her. She would be held in a detention centre before being deported - perhaps straight back into the hands of the traffickers.

The man is Neil Chapman and the woman is Liliana Petreanu. The Slave is the story of what Neil eventually does, and what happens to Liliana as a result... and the dilemma faced by Bernard Kassin, a respectable, law-abiding older neighbour.

The Unknown Mrs Rosen, published 2020, is about a former spy at the end of a secret life about which her family and carers know nothing. https://www.andrewsanger.com/the-unknown-mrs-rosen.

The J-Word, about an elderly man who seeks justice in his own way after being attacked by an antisemitic gang, was published in the UK in 2009 by Snowbooks, and came out in a Kindle edition in 2011. The rights returned to me in 2018, and a new edition was published. It was very well received in the UK, had excellent reviews in the British press, and was featured at London's Jewish Book Week and the Hampstead & Highgate Literary Festival. For more about The J-Word see https://www.andrewsanger.com/the-j-word

The Slave, about a young 'client' who tries to free a woman from forced prostitution, was published in 2013 at Smashwords as an ebook for multiple platforms, and is also available as a paperback. https://www.andrewsanger.com/the-slave.

Love, published 2015, is a story of heartbreak on the hippie trail, set in the heady atmosphere of the late Sixties. https://www.andrewsanger.com/love.

To read about my novels and see what reviewers thought of them, see https://www.andrewsanger.com.

Reviews of The Slave by Andrew Sanger

You have subscribed to Smashwords Alerts new release notifications for Andrew Sanger.

You have been added to Andrew Sanger's favorite list.

You can also sign-up to receive email notifications whenever Andrew Sanger releases a new book.