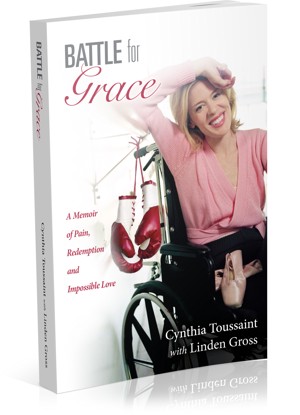 Battle for Grace: A Memoir of Pain, Redemption and Impossible Love

Battle for Grace is a gut-wrenching memoir about excruciating pain, remarkable redemption and impossible love, told warts and all by the two people who lived it. It describes a journey that took Cynthia Toussaint and her life partner John Garrett to depths that could have ended their lives, but instead are giving hope to millions of women around the world. More
Battle for Grace is about a seven-year-old girl who sees Funny Girl and has a dream. To act, to dance and to sing.

It’s also about how she becomes a woman whose life is virtually destroyed by a crippling mystery illness and how she fights the institutions that failed her. A woman who has lived an almost impossible love story that began before her illness. Somehow she and the man who is her reason for living, her caregiver and her partner in life have managed to stick together for more than thirty difficult years.

Battle for Grace tells how she reinvents herself and turns tragedy into triumph for millions of women worldwide. At the same time, she transforms her life into something more beautiful and meaningful than her original dreams of stardom.

Ballerina Cynthia Toussaint’s promising career ended abruptly when a rehearsal injury that caused excruciating pain remained undiagnosed for thirteen years. This left her bedridden for a decade, unable to speak for five of those years and often reduced to uncontrolled violence. Throughout all of this, Toussaint’s claims of pain were discounted by her HMO as being all in her head—a frequent occurrence with women and their doctors.

Many people with her illness—sometimes called the Suicide Disease—take their lives instead of contending with the pain. Toussaint’s story is about her refusal to be a victim. She not only fought to survive, she has taken on the role of activist and aggressively challenges the HMOs and pharmaceutical companies that put profit ahead of patient care. Wheelchair bound, she founded a nonprofit and entered the political arena as an advocate for women in pain.

In the process, Toussaint has become a media magnet. She has appeared on more than seventy-five local and national television shows and been featured in over 200 news stories. Her list runs the gamut from community newspapers to The New York Times, Newsweek and ABC World News with Diane Sawyer.

Cynthia Toussaint founded the organization For Grace in 2002 to raise awareness about the chronic pain disease Complex Regional Pain Syndrome, and five years later expanded the organization’s mission to ensure the ethical and equal treatment of all women in pain. She currently serves as spokesperson, and has had CRPS for 30 years. Before becoming ill, she was an accomplished ballerina and worked professionally as a dancer, actor and singer.

Since 1997, Toussaint has been a leading advocate for women in pain, raising awareness through local, national and worldwide media as well as public speaking. Toussaint championed and gave key testimony at two California Senate informational hearings. The first, in 2001, was dedicated to CRPS awareness, and the second, in 2004, explored the under-treatment of chronic pain and gender bias toward women in pain. Both of these efforts were the first of their kind in the nation.

Toussaint has been featured on ABC World News with Diane Sawyer, PBS, Discovery Health, The Learning Channel, AARP The Magazine, Newsweek, Woman’s Day and The New York Times, among others. She is a consultant for ABC News, FOX News and PainPathways, the official magazine of the World Institute of Pain.

In 2006, Toussaint ran for the California State Assembly to bring attention to her CRPS Education Bill that Governor Schwarzenegger vetoed after it got to his desk in its first year. Her current Step Therapy bill will reform an unethical prescription practice used by the health insurance industry to save money in a way that increases the suffering of California pain patients.

Toussaint continues to be a leading advocate for healthcare reform in California and beyond. She was instrumental in changing public opinion that sparked sweeping HMO reform legislation that was signed by California Governor Gray Davis in 1999. Her focus has now shifted to creating a single-payer, universal healthcare plan in California that would provide a model for the rest of the country.

Toussaint is currently experiencing her second partial CRPS remission (first in 27 years!) However, in 2011, she sustained a broken right elbow at the hands of an overly aggressive physical therapist, leading to a year of misdiagnosis, harmful therapies and an upcoming surgery. Her interest in upgrading healthcare in America will continue to be a focus for her and For Grace in the future.

Reviews of Battle for Grace: A Memoir of Pain, Redemption and Impossible Love by Cynthia Toussaint

Review
Corinne Strom reviewed on April 13, 2013
(no rating)
Good book, really held my interest. As I am having a pain situation myself I would recommend this especially to people with chronic pain. It gives you hope and the will to keep searching for the right person to help your situation. Haven't found that person yet but this book has inspired me to try again, after having given up. This book was written from the depths of her soul.

You have subscribed to Smashwords Alerts new release notifications for Cynthia Toussaint.

You have been added to Cynthia Toussaint's favorite list.

You can also sign-up to receive email notifications whenever Cynthia Toussaint releases a new book.