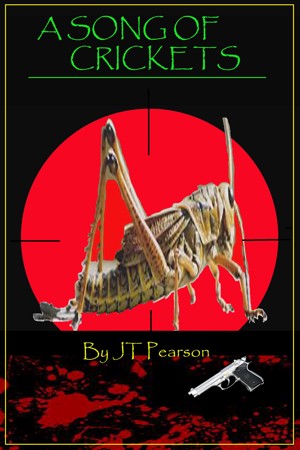 A Song of Crickets

By JT Pearson
Rated 4.20/5 based on 5 reviews
Recovering drug addict Dannie crosses the head of a drug cartel which puts her and her husband Junior on the run from a hitman right out of a nightmare. WARNING: Although this story is written tastefully (Tarantino-esque) some readers may be offended by the violence and torture. More
When recovering drug addict Dannie takes a job for a local drug dealer working at his drycleaning store that he uses as a cover to launder more than just towels she has no plans of crossing him. But when she sees the cocaine that's delivered and put into her care to lock in the store safe she decides to steal just a taste. But after she's high she grabs both the drugs and the money. She flees the store and tells her husband Junior what she has done. The two of them are chased across the country by Raycraft the coldblooded hitman that works for the drug lord.
Download: epub mobi (Kindle) pdf more Online Reader
rtf lrf pdb txt
Price: Free! USD
Add to Library
Create Widget
Tags: romance crime murder cocaine death drugs couple hitman killer pulp fiction true romance on the run tarantino coldblooded
About JT Pearson

About the author
JT Pearson studied writing at The University of Minnesota. He now lives in Wisconsin near his parents, most of his fifteen siblings, and their children. When he’s not writing he spends the majority of his time with an army of extremely small, dirty-faced beggars who are often missing at least one shoe, talk funny, are short a few teeth, and regularly pick his pockets for gum and small change whenever he’s distracted.
Feedback is much appreciated.

Not my usual style, but I'll read anything by this author. He never disappoints.

I was laying in bed unable to sleep so I started reading. Browsed a few stories. I love mysteries. I came across this one. I didn't know how good it actually was until my wife got home (nightshift) pointed a few things out to me. I didn't understand the ending. I thought the writer just pulled up lame but then she pointed out all of the clues so that I could see that the story had a great ending. She's alot smarter than I am. She makes sure that I know it too. Anyway, at first this story had a little too much fancy prose for me but then I got into his style and it's good. I really liked the relationship between the man and woman on the run. And the writer's description that this story was like a Tarantino movie, I can see what he's saying. I just wish it was alot longer. Like I said, I read the story and couldn't figure out why it had no end. So, if you couldn't figure it out like me and another guy that left a review on this page I'll explain it to you. Like my wife said, it's obvious once you think it through. The description of the woman says that she can sneak up on just about anything as long as there is a little cover of noise. The narrator (the guy in the story, Junior) describes her as stubborn. He also said she argued with him telling him there was no way she was going to leave him on his own when he told her to leave and seek safety. He also said that she always smelled like cinnamon because she put it behind her ears (stange trait but whatever). He also said that he'd left his straight edge knife with her. Raycraft went out to smoke his cigarette and the woman came back, snuck up on him, and slit his throat with the straight edge. That's why when the door slowly opened all he heard was the crickets from outside and then for good measure he adds that he smelled cinnamon. A great ending. Too bad some guy with a head full of rocks like mine is didn't take the time to figure it out left him a one star. Maybe his wife isn't smart enough to help him out (she'll read this review and after all of the kissing up I been doing she beter leave our Satuday night open to go to the movies. Anyway, this is the best story that I've read in a while. I just joined this sight. I hope I run into more thrillers like this one. This guy doesn't have much in that style. Bunch of funny stuff. Not interested. Didn't really get the cover either. If this guy writes a few more shoot em ups and I'll tune in and read his stuff.

I really sympathized with the protagonist. Unlike "No country for old men" which I also thought had an appropriate ending, in this case, the brutality justified the happy ending.

This story is a masterpiece ... and it does have an ending. What do you think the sound of crickets means at the end? Think about it.

You have subscribed to alerts for JT Pearson.

You have been added to JT Pearson's favorite list.

You can also sign-up to receive email notifications whenever JT Pearson releases a new book.