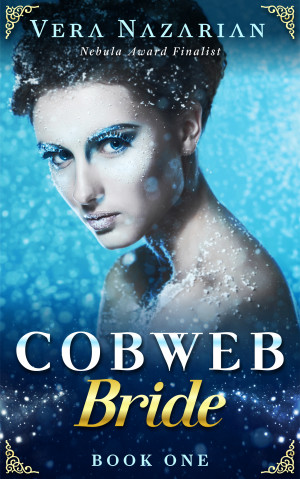 By Vera Nazarian
Rated 5.00/5 based on 3 reviews
Many are called... She alone can save the world and become Death's bride.

COBWEB BRIDE (Cobweb Bride Trilogy, Book One) is a history-flavored fantasy novel with romantic elements of the Persephone myth, about Death's ultimatum to the world. More
Many are called...

She alone can save the world and become Death's bride.

COBWEB BRIDE (Cobweb Bride Trilogy, Book One) is a history-flavored fantasy novel with romantic elements of the Persephone myth, about Death's ultimatum to the world.

What if you killed someone and then fell in love with them?

In an alternate Renaissance world, somewhere in an imaginary "pocket" of Europe called the Kingdom of Lethe, Death comes, in the form of a grim Spaniard, to claim his Bride. Until she is found, in a single time-stopping moment all dying stops. There is no relief for the mortally wounded and the terminally ill....

Covered in white cobwebs of a thousand snow spiders she lies in the darkness... Her skin is cold as snow... Her eyes frozen... Her gaze, fiercely alive...

While kings and emperors send expeditions to search for a suitable Bride for Death, armies of the undead wage an endless war... A black knight roams the forest at the command of his undead father… Spies and political treacheries abound at the imperial Silver Court.... Murdered lovers find themselves locked in the realm of the living...

Look closer — through the cobweb filaments of her hair and along each strand shine stars...

And one small village girl, Percy—an unwanted, ungainly middle daughter—is faced with the responsibility of granting her dying grandmother the desperate release she needs.

As a result, Percy joins the crowds of other young women of the land in a desperate quest to Death's own mysterious holding in the deepest forests of the North…

This book took me to a place I'd never known of, a far off land where magic and intrigue intertwine into an explosive mind entrancing adventure. This is a book worthy to be read for generations

very interesting book, i enjoyed it a lot!

I absolutely loved this first book of the Cobweb serie.
Vera Nazarian is a truly talented author. the description of the realm was marvelous and I found each and every single one caracter very touching. To be honest I prefered this retake on Persephone's story over C.S. Lewis's one ! And I read a lot of them for the myth is truly captivating.
This is a must read I couldn't put it down until I finished it through I had so much workon the past 2 days.
Thank you so much for bringing us this book and letting us enter one of your universe. Keep up the great work, I can't wait to read the second and third book !!!!

(review of free book)
B. Ross Ashley reviewed on July 14, 2013
(no rating)
Vera Nazarian continues to outdo herself as a writer ... the first volume of her new series is excellent.