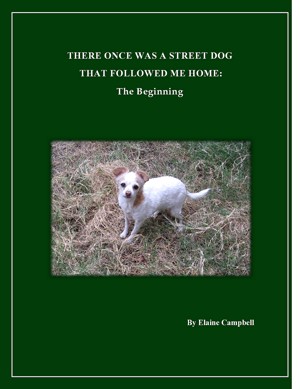 Once There Was A Street Dog That Followed Me Home: The Beginning

By Elaine Campbell
My life in animal rescue began by encountering a badly wounded dog while hiking in the Colorado Desert, the victim of a coyote. As he began his healing process, I proceeded to come across, and invite into my life, a congregation of the liveliest, sweetest and saddest homeless furry friends (and some not so furry) one would ever hope to meet. This is our story. More
Upon moving to the Colorado Desert (don't ask me why; odd things happen in my life), my sole companion, an elderly street dog I had found 14 years before, suddenly died. Beau's death set off a chain of circumstances that resulted in my adopting abandoned and discarded animals, birds and even rodents in my life to come.

This is a story of the ups and downs, the ins and outs, the disappointments and the joys of loving natural life and caring for it beyond what the rationalists call "the safe middle road," easily travelled, but to me an empty shell.

One day while hiking alone in the desert, I spied a lone dog hobbling badly through the sand and covered with blood. I knew at once that he had been attacked by a coyote. A German Shepherd mix, he was no match for the savvy wild one.

The ball having started to roll, I continued to come across, and invite into my life, a congregation of the liveliest, sweetest and saddest homeless furry friends (and some not so furry) one would ever hope to meet. Some couldn't see. Some didn't hear. Some didn't have all their limbs. But we got along as best we could. While many are with me still, many have passed on. Noel the rat, Tommy J the guinea pig, the dogs, the cats, the birds that enriched my life beyond imagination.

This is our story.

Though I was born in the snowy state of Wisconsin, due to the untimely death of my father, my first childhood memories are of Southern California where my mother relocated in order to try marriage a second time. The small town where we lived was idyllic with plentiful orange groves, canyons with waterfalls plunging into grateful ponds, and a view of the San Gabriel Mountain range with Mount Baldy gleaming on top.

But that was not all of my childhood for my mother had the movie bug, and my younger brother and I spent much of our time in Hollywood learning the entertainment arts. Yes, we were movie kids, and being adjustable like most children, we took it in stride.

After high school graduation at age 16, I joined a dance ensemble in Las Vegas with the Tony Bennett Show (Tony was a newly rising star then) at the Sahara Hotel (called "The Jewel of the Desert") on the Las Vegas Strip in order to raise tuition for the esteemed Neighborhood Playhouse School of the Theatre in New York City, which I decided to attend to become a serious thespian. While in Las Vegas, however, I formed a most rewarding and unusual friendship with the world's most famous gambler, Nick the Greek, that became the subject of my first published book, My Friend Nick the Greek: Life in Las Vegas in the '50s. After some years working in theatre, I took an about face and enrolled at NYU, majoring in psychology. A teaching career followed, and later a stint as public relations director at a small book publishing firm.

Taking an early retirement, I returned to my roots and, having an aversion to LA smog, settled in the Colorado Desert with a stray dog I had encountered on a walk some 14 years earlier. Beau was a cocker mix and the first animal that I bonded with in my adult life. But our mutual desert adventure was to be short-lived as sweet Beau died of a stroke within a month after our relocating.

My latest book, Once There Was A Street Dog That Followed Me Home: The Beginning, relates my numerous experiences in animal rescue and adoption during the years that followed, learning of the plight of "The Throwaways," many of them seniors, firsthand. Of course, it was painful knowing we had so little time together, but the ultimate rewards outweighed any consideration of sorrow.

Where there is love, time is never wasted. And I'm happy to say that love of the lost and abandoned became the highpoint, as well as the foundation, of my life.

You have subscribed to alerts for Elaine Campbell.

You have been added to Elaine Campbell's favorite list.

You can also sign-up to receive email notifications whenever Elaine Campbell releases a new book.