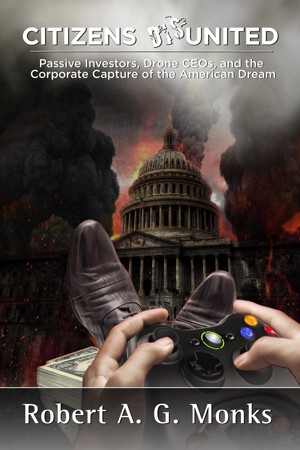 By Robert A.G. Monks
Robert A. G. Monks has been a CEO and board member of large public companies, the head of the Labor Department's ERISA agency, and an entrepreneur/founder of companies including proxy advisor Institutional Shareholder Services. In this book, he shows how corporate executives divert shareholder assets to undermine democracy and enrich themselves, putting both capitalism and democracy at risk. More
Democratic capitalism—the source of America’s vast wealth, the foundation of our entire economic system—is threatened as never before, not from without but from within. Shareholders today no longer own, except in the narrowest legal sense, the corporations they have invested in. Emboldened by the Supreme Court and enabled by a compliant Congress and compromised regulators, America’s CEOs have staged a corporate coup d’état. They, not the titular owners of the businesses, decide where and how company resources will be deployed, what laws will be evaded in the pursuit of short-term gain, what offshore havens profits will be stashed in to avoid taxation, and critically, how lavishly the CEOs themselves will be compensated.

Far too much of American business is being run for the personal enrichment and glorification of its manager-kings.
This book shows how that happened and unveils, for the first time, a new study showing that corporations “un-owned” by their shareholders—corporate “drones”—are far worse corporate citizens and have significantly lower average shareholder returns than firms in which owners still exercise authority over management. Manager-kings, it turns out, are bad both for society and for business itself.

Mr. Monks is an expert on retirement and pension plans and was appointed director of the United States Synthetic Fuels Corporation by President Reagan, who also appointed him one of the founding Trustees of the Federal Employees’ Retirement System. Mr. Monks served in the Department of Labor as Administrator of the Office of Pension and Welfare Benefit Programs having jurisdiction over the entire U.S. pension system.

Mr. Monks was a founder of Institutional Shareholder Services (ISS), now the leading corporate governance consulting firm. He also founded Lens Governance Advisers and co-founded GMIRatings (formerly The Corporate Library). He is a shareholder in and advisor to Trucost, the environmental research company.

Mr. Monks was a featured part of the documentary film, The Corporation, and was the subject of the biography, A Traitor to His Class by Hilary Rosenberg.

You have subscribed to alerts for Robert A.G. Monks.

You have been added to Robert A.G. Monks's favorite list.

You can also sign-up to receive email notifications whenever Robert A.G. Monks releases a new book.