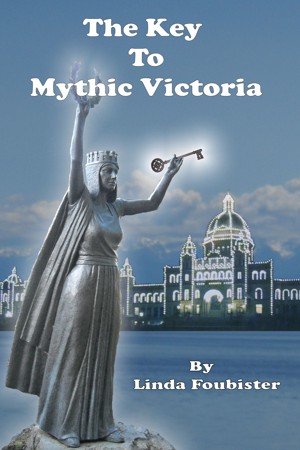 The Key to Mythic Victoria

For author, Linda Foubister, it's all about mythology. As a writer, researcher and public speaker, Foubister is interested in the interplay between mythology and popular culture. Her works include "The Key to Mythic Victoria" and "Goddess in the Grass: Serpentine Mythology and the Great Goddess," as well as numerous articles in community magazines, encyclopedias, ezines and anthologies.

It is well-known that a sea monster lives off Cadboro Bay in Victoria, BC, but did you know there have also been mermaid sightings nearby? Like his cousin the Loch Ness Monster, Cadborosaurus lives because of people’s “desire to believe in sea monsters.” We need and love the world of dreams, myth and imagination, and in this book Linda Foubister demonstrates just how much of it sparkles and murmurs below the surface on southern Vancouver Island. “The aspens at Government House can be heard telling their tales during a light breeze,” she says, and they’ve been telling them to generations of colonials and the native people who came before, whose tales are also well represented in this survey of Victoria’s myths and history.
However long they have lived here, residents will find in this book nuggets of fact and lore they probably haven’t heard before about Victoria, and visitors will find an introduction to the city unlike what appears in the tourist literature. Foubister tells us about magic trees, nourishing springs, the 10,000 crows that make Victoria North America’s “crow capital,” the treasure trove of symbolism in the city’s Victorian garden cemetery and its compact Chinatown … but she doesn’t only catalogue intriguing facts and tales, she relates them to the larger tapestry of world mythology. We meet local versions of the archetypes found in classical, oriental, Celtic and ancient tales worldwide.
The city’s architecture too is set in the context of historical trends and fashions. Victoria’s government, religious and commercial buildings are rich in symbolism and decoration from neo-gothic, Medieval-revivalist, neo-classical and modernist periods. Foubister has walked the streets with her gaze focused upward; residents who haven’t yet looked for themselves will be amazed at the number of faces that gaze back at us from roofs and walls. Most people go about their daily business oblivious to the gallery of lions, twining snakes, green men and Greek gods that watch over us.
The provincial legislative buildings are a treasure trove of symbolism in domes, pillars, galleries and windows, and Foubister introduces us to the architects and craftsmen who created this stately seat of parliament and the rest of the early built environment. Many were plainly enamoured of romantic castles, crenellations, alleys and secret tunnels. The “fairyland” of the exquisite (and foolishly lost) Crystal Garden swimming pool is described, with its palm-graced dancing salons and glass roof inspired by the Crystal Palace of London. And who knew how fascinating bank architecture could be? Foubister traces the evolution of their design from dignified gravitas expressed through classical symbolism, to soaring corporate hubris signified by increasingly stark and stylized logos.
Victoria has more than its share of resident artists, writers, supernaturalists and nature lovers, and all draw inspiration from the pet ghosts, legends, mists, wildlife and natural beauty of the area. Creative home-towners and newcomers alike follow in the wake of Robert Service, Emily Carr, the Arthurian scholar Katherine Maltwood, and world-renowned architects like Francis Rattenbury and Samuel Maclure. If “myth brings the layers of Victoria to life in the imaginations of the people,” we can extend the metaphor to say that this Key fills a role of midwife.

You have subscribed to alerts for Linda Foubister.

You have been added to Linda Foubister's favorite list.

You can also sign-up to receive email notifications whenever Linda Foubister releases a new book.