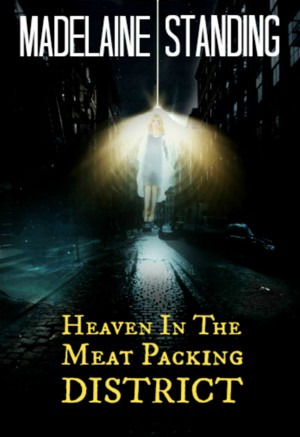 By M. Standing
A neuroscientist named Sheldon attempts to rewire the counterproductive patterns in the brains of willing volunteers who have been recruited from the Meat Packing District of New York. When the experiments go awry newscaster, Ana McKenna, is asked to develop a way to rescue the unconscious volunteers by way of her involvement in a top secret news story at the local station.

Madelaine Standing is an American-Canadian novelist born in Virginia Beach, Virginia who has lived in Vancouver, Canada for nearly a decade. Her first novel, 'Heaven In The Meat Packing District', was inspired by participation in a science experiment involving the electroencephelograph at Northern California's Esalen Institute. It is a thoughtful investigation into the possible side effects of modern day technological advances. 'Jail or Garden', Madelaine's second book, is being Released in sections throughout 2013 as she assists writers with their novels as Writing Coach and Creative Consultant, over the telephone, with clients throughout N. America.

Madelaine offers her thanks to Esalen Institute where she has studied several holistic therapies over the course of three years, Emily Carr Art Institute where she studied Creative Writing, and the University of British Columbia for their Creative Writing expertise. A warm thank-you to SFU's: The Writer's Studio for their monthly events that give writers a voice where Madelaine's work has been read to the audience in attendance.

You have subscribed to alerts for M. Standing.

You have been added to M. Standing's favorite list.

You can also sign-up to receive email notifications whenever M. Standing releases a new book.