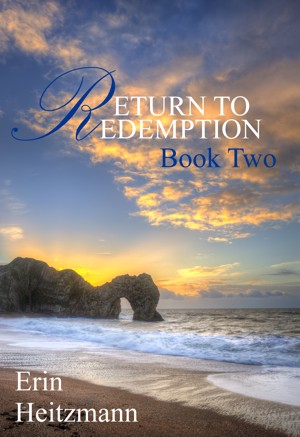 By Erin Heitzmann
Saved from a certain death by the miraculous power of God, Rebecca Halloway longs to be reunited with Captain William Jameson and the men of the Redemption, but will their unexpected return to Portsmouth bring her the solace and resolution she so desperately yearns for? More
After suffering a near fatal gunshot wound while onboard His Majesty's Frigate Redemption, the massive British warship under the strict command of Captain William Jameson, Rebecca Halloway was returned to England and delivered into the hands of her mother and father, frightfully close to death. Now, six months have passed and Captain Jameson and his crew are returning to Portsmouth in the hopes of securing a liaison who will lead a group of men into France to reclaim several of their shipmates taken as prisoners of war by Napoleon Bonaparte's army. Thinking the girl dead, the captain and his crew are astounded to discover that Rebecca Halloway still lives, but even more astounded when they come to realize it is she who intends to lead the men of the Redemption across the perilous terrain of France and into the midst of the enemy!

Erin Heitzmann was raised in Bismarck, North Dakota, and after graduating from high school, spent the next several years in a variety of different places, from as far away as Japan, and as exotic as Hawaii. Erin finally chose Montana as her home, where she met and married her husband Dean. She and Dean live in the beautiful Bitteroot Valley near Missoula, where they have raised five wonderful children, the youngest of which is still at home. Erin served for two years as a Kindergarten teacher at a private, Christian school, and remained on staff at the school as a volunteer until their last child started first grade. Erin then returned to college to pursue a nursing degree, and graduated with honors from Montana State University in 2006. Erin currently serves as the administrator of an assisted living facility in Missoula, and has discovered that working with the elderly population is both her calling and her passion. She writes for the sheer pleasure of it, and hopes that you enjoy reading the Redemption series as much as she has enjoyed writing it.

You have subscribed to alerts for Erin Heitzmann.

You have been added to Erin Heitzmann's favorite list.

You can also sign-up to receive email notifications whenever Erin Heitzmann releases a new book.