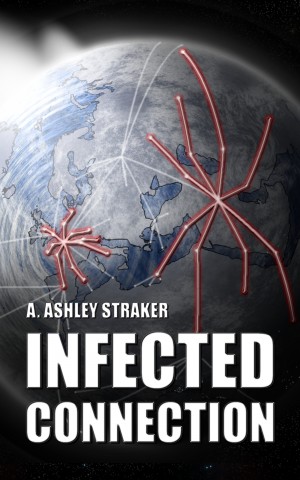 By A. Ashley Straker
Rated 5.00/5 based on 2 reviews
Something is incubating inside phone batteries - something hostile and ready to hatch. This discovery leads a stressed technician on a journey across thousands of miles, trying to trace the source of the conspiracy. People become pawns, friends become foes, and civilisation itself starts to crumble as he is reluctantly recruited in the fight against an unfathomable enemy. More
While investigating a fault plaguing the newest model of smartphone, stressed technician Simon Parfitt makes a disturbing discovery. Incubating inside the batteries are spider-like creatures, and the phenomenon seems to be spreading.

But when Simon tries to alert the authorities, people start trying to kill him.

As paranoia sets in, Simon is reluctantly recruited in the fight against an enemy that remains several steps ahead.

INFECTED CONNECTION is a high-tech thriller, in which an unassuming man is plunged into circumstances beyond his comprehension or control. He is led on a journey of thousands of miles, flung into the path of an unfathomable foe, and must ultimately ask himself how far he is willing to go, and how much he will sacrifice to see a job through.

A. Ashley Straker lives in the UK.
She likes cake and monster movies.

Learn more about A. Ashley Straker

Infected Connection teaser trailer
Smartphone technician [NAME REDACTED] loses his job after he discovers bug-like creatures incubating in phone batteries. This classified file is the video he made to try and get the word out.

It's been a long time since I have read a book which I found hard to put down and 'Infected Connection' is definitely one of those books. I thoroughly enjoyed its imaginative storyline which just kept me wanting to turn the pages and read the next chapter. This great horror/sci-fi/action with a dash of romance has a great paced storyline which just keeps you guessing and surprised me at every turn. It’s truly a pleasure to read and envelops you in a futuristic nightmare that is very relevant in today's technologically advanced, artificially intelligent and nano-robotic world. It provoked in me new visions of whole landscapes of freaky scenarios that I hadn't considered up until now and these thoughts have stayed with me after. It is a bit like Invasion of the Body Snatchers meets War of the Worlds with a dash of Arachnophobia - totally thrilling and psychologically staining. The concepts can be taken on many different levels depending on how deep you want to delve into your own mind. I highly recommend this book if you want to read something imaginative, well written and different that might just scare you more than you bargained for.

Infected Connection is a fast paced sci-fi thriller/horror that brings to life the worse nightmare of many (if not all) technology and gadget fans...your phone is not safe. The story begins innocently enough with a new smartphone being recalled due to technical issues but it quickly becomes apparant to technician Simon Parfitt that things are not quite as straight forward as they seem. In fact the problem with the phones combines the stress of technology breaking down (face it, we all stress out when our phones don't work...) with his worse fear and greatest phobia...spiders! And so begins Simon's quest to get the message out to Government and the public in the face of an enemy that can control the very information sources we rely on for our daily dose of news, gossip and procrastination.

This story may be a little quiet to start with Simon being a softly spoken technician, uncertain of himself, what he has found and what to do about it but don't let this fool you, it will pull you in and drag you along staring at your phone with suspicion the entire way (which makes reading on it difficult I can tell you!) and by the end you will find yourself cheering for Simon and his phobia...and Invisible Max (loved I.M!!!). Yes the characters do fit nicely into the sterotypes of socially awkward technician, sexy secretary and homeless man with a shady scary a*se past but why the fix something if it isn't broke (and lets face it, everyone loves the familiarity of a sterotype)? There is something in each of the characters that the reader can relate to and as such this makes them and the story more real and thus more believable (again you will not trust your phone...at least for a while).

Straker has also broken up the out and out action with plenty for the geeks (and inner geeks...admit it, you have one) running through the more technical aspects allowing the characters (and the reader) to catch up with the whys and wherefors adding an extra depth and dimension to the story that could so easily have been just another sci-fi thriller. And then of course there is Simon's phobia, which as a spider lover I just found hysterical (cruel of me, I know), and which added a level of humour, along with Max's superb one-liners (did I mention that I loved Max?!), that the dark side of your funny bone will love. Just read it people!!!

You have subscribed to alerts for A. Ashley Straker.

You have been added to A. Ashley Straker's favorite list.

You can also sign-up to receive email notifications whenever A. Ashley Straker releases a new book.