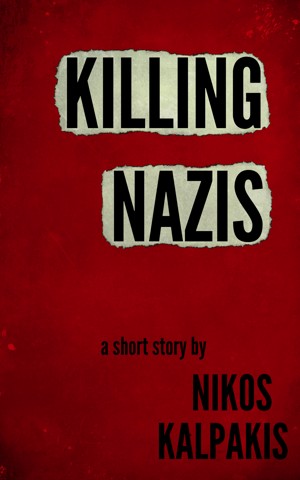 The synopsis of this book is so vague that when I read it, I had no idea what to expect from it. But since I like the subject of Nazis (it's just fascinating, I'm totally against them) I thought I should give it a try. This book is a nice change from the Contemporaries I've been reading lately. Although a short story, it was interesting and action packed, a nice thriller.

Themis is a lonely artist living in Greece, who was taught to protect his gift and not care for having friends or girlfriends, because they are pointless distractions. His grandma washed his brains with this idea and he grew up to become a lonely artist who wants to be a psychopath. And from the synopsis the can get the whole idea, I'm not going to spoil it all to you.

Even though I felt a bit disoriented in the time this story is set, because I expected it to be set in WWII, the writing was really good- descriptive and fluent, I liked how it felt like a real psyhos mind I was getting a view of. I was pulled into the story and in the end I wished to have more. The action in this book was so good and just enough for me to have a small adrenaline rush. Bottom line- I enjoyed this book and would want for it to be longer, this story has a potential to become more. If you, my read reader, enjoy thrillers or horrors, this short story is right for you.

And don't be afraid from how vague is my review, I just didn't want to spoil this story. Read it yourself and, hopefully, you'll enjoy it too.

"Killing Nazis" is a story that is extremely topical and seems relevant at first, in regard to the recent surge of Neonazism in Greece and the subsequent anti-fascist struggles that are taking place. However, the story unfolds above and beyond these phenomena.

The protagonist, a painter, lives inside a virtual "prison" constructed around his need to protect his special talent. This prison has been gradually re-inforced by his upbringing, the most important role in which is played by his grandmother. Whatever door was there to help him find the exit out of that prison, is shut by the hatred she has instilled in him, and his own insistence has thrown away the key.

In this universe, the only way out seems to be violence, which erupts, steadily at first, but like a volcano, at the end, liberating him.

"Killing Nazis" should not be read as an ideological war, per se, but rather, as one man's battle to find meaning in his life - or as one desperate attempt, to escape from the shackles of his mental prison. Unfortunately, this prison is his own mind and sanity seems to be the price he has to pay, in order to be free.

Plot-wise, the story twists and turns surprising the reader again and again. It's an interesting story, well told, so it's definitely worth your time.

(reviewed the day of purchase)
Charlotte Jones reviewed on March 27, 2013

Although I was intrigued by the synopsis and really wanted to read this, I am sometimes put off by short stories as they can sometimes lack development. I read this in pdf format on my tablet so there were only 16 pages, and when I received it I was thinking “surely this can’t be that in depth”, but I was wrong! The main character Themis’ history is described in just enough detail and I found that the premise was exciting and fast paced.

The action shown in this was exciting, although extremely violent at points. This is definitely an adult book due to the violent passages and sexual references, but definitely worth reading.

I would give this book 4 out of 5 stars because although it was very well written and the depth of development was good, I personally am not a massive fan of violence in books. However, I would recommend this read and believe that it is a brilliant look into the human psyche and also a fast paced, action packed story.

You have subscribed to alerts for Nikos Kalpakis.

You have been added to Nikos Kalpakis's favorite list.

You can also sign-up to receive email notifications whenever Nikos Kalpakis releases a new book.