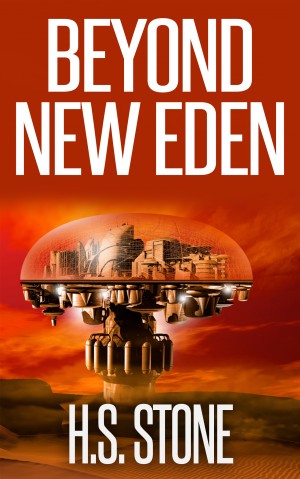 At first, Eve 142 considers their punishment a death sentence because she grew up believing the world outside the dome was uninhabitable. She is wrong. Forced to live in the Wastelands, Eve and Adam discover many new truths about the outside world and, more importantly, the truths about themselves.
Available ebook formats: epub mobi pdf rtf lrf pdb txt html
First 10% Sample: epub mobi (Kindle) lrf more Online Reader
pdb
Price: $2.99 USD
Buy Add to Library Give as a Gift
How gifting works
Create Widget
Tags: young adult sci fi clone post apocalypic
About H. S. Stone

Even before he could read, H.S. Stone wanted to write a book. Fascinated by the stories that seemed to leap from his kindergarten teacher's books, he went home and wrote his own book, with illustrations and bound by staples. Of course, since he didn't know how to read or write yet, the book was full of gibberish.

Undaunted, H.S. eventually mastered the ABC's and continued to write throughout his grade school years, adolescence, and into adulthood. His publications include novels aimed at Young Adult and Middle Grade readers as well as several short stories. He currently lives with his family in the San Francisco Bay Area.

I love dystopian fiction and this novel did NOT disappoint. What I found most interesting was the blend of themes that are woven together in this story line. The world of Beyond New Eden is post-apocalyptic, what is left after a war that devastated the entire world. At first the world inside the dome seems as close to utopian as possible. It is a peaceful, ordered society. Class systems do not exist in a society of clones, each person the same as the ones before and after them. But we soon discover that, as with most utopian worlds, there is much that is dystopian in nature.

Adam and Eve 142 are at the center of this books, two paired clones. A horrible tragedy causes them to be banished from the city for six months. During the six months that they are gone, they discover that the world outside is not as much of a wasteland as they were taught, even finding other humans that have survived, even flourished.

The characters are fantastic, the foils between those inside and outside New Eden fascinating. Those inside the dome are not devoid of emotions, but they are seemingly dampened, especially when compared to those in the outside settlements. It is through those other humans that Adam and Eve learn more about themselves and humanity itself. Their romance was very sweet and innocent as they discovered what it really meant to be human.

--The world of New Eden. It was perfectly created.
--The emotional growth of Adam and Eve.
--The secrets and twists.

Things I wanted more/less of...

My Recommendation: I loved the twists and turns, the intrigue of the story line. The ending suggests that there is more to come and I hope that there will be! I gave it 4.5 mugs!

This review originally appeared on my blog: http://thecaffeinateddivareads.multifacetedmama.com/?p=10091.

You have subscribed to alerts for H. S. Stone.

You have been added to H. S. Stone's favorite list.

You can also sign-up to receive email notifications whenever H. S. Stone releases a new book.