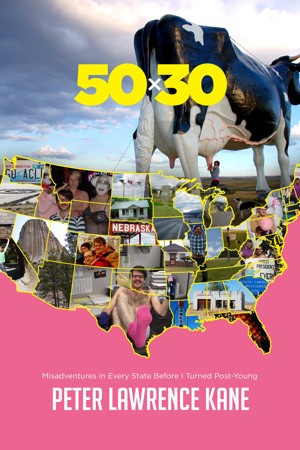 50X30: Misadventures in Every State Before I Turned Post-Young

Rated 5.00/5 based on 1 reviews
This account of a gay nerd's quest to achieve a lifelong dream proves that wasting your twenties is impossible. More
Fueled by an insuperable lust for life and earnings from three game shows, Peter Lawrence Kane sought to realize his life-long goal: getting to all fifty states before his thirtieth birthday. This is the hilarious account of the bizarre (mis-)adventures that befell a self-described "gay nerd" as he moved around the country, making out in national parks, sneaking his dog into motels and falling in love with kitsch roadside Americana. Torn by the desire to complete the quest and the need to earn a living, Kane can't resist the allure of the road even if it means turning into his own worst enemy. What else are your twenties about?

Peter Lawrence Kane's work has appeared on MSN, The Bold Italic and SF Weekly, among other places. "50x30: Misadventures in Every State Before I Turned Post-Young" is his first book. Born in New York, he lives in San Francisco.

Peter Lawrence Kane's "50X30: Misadventures in Every State Before I Turned Post-Young" begins with a drunken college promise by the young author while standing on a chair in his dorm room: he will visit all fifty states in the Union by the age of thirty. From that vow comes the series of near-disastrous road trips, amusingly thwarted attempts, fly-bys, and accidental-and-purposeful tourism that make up "50x30."

Kane writes of each of the trips through the US with amusing detail and humor. His anecdotes of the adventures and scrapes along the highways and rueful motel stays are hilariously funny. Instead of fake-patriotic boosterism, we get blunt and frank assessments of 'Middle America" that make one want to visit even more: "Just as New York maintains its ugliest precincts in New Jersey, under the high bridges over the Hackensack River, and California banishes its most hideous cities to its hot, flat interior, Chicago mistreats Gary and has permitted it languish there, reliant on its disintegration to keep its own image free of taint." It's the sort of shocked rubbernecking of a municipal tragedy that points out the true character of the US.

Kane's wit is tempered by his ability to intelligently discuss a range of topics, and with his debate-school training, he's a convincing voice. Interspersed throughout are his mediations political landscape of both red and blue states. He seems to have a willingness to embrace states of all political stripe as long as they provide an unmatchable experience to add to his growing resumé of travels. In one passage in Utah, Kane visits the seminal earthwork art piece, "Spiral Jetty," and is able to limn the attraction of the modern with precision. His observant eye dissects with interest, bringing us along as if a stand-up comedian in a medical theater.

Kane is refreshingly unapologetic and open about his being gay and his sexuality, and includes these as biographical history, making for an honest and sometimes touching remembrance: "I had stupid hair that a later boyfriend would compare to Ace Ventura’s and stupid taste in music and no courage. I was complacent, terrified of everything, and residually hyper-competitive as a strategy of getting through high school without getting my ass kicked for being unable to do more than two pull-ups. And I was Catholic—which is something you can never fully exit."

Kane's partners, boyfriends, and his dog Dudley all are up for the ride across the states. There are however, a couple of sad endings to relationships, one in which Kane was sideswiped by it and it takes a weeks-long bender of crying and sex to relieve the agony. Despite the comedic remarks that went before, these passages ring true and real and bittersweet.

Most of his journeys are fueled by endless catering work and grinds at what seem to be miserable existences at labor, but Kane's Dorothy Parker eye seems to make those back-to-back shifts seem like a particularly wacky sketch comedy sample. Even more goal state adventures are backed by a windfall of cash from game-show appearances. Kane ends up scraping by just as the last hours of thirty close in, both financially and at his goal age. It wraps up in true fashion, with a megaparty in New Orleans, a photo-op of the final state visited, and a brief coda that speculates on what other new goals he might soon accomplish.

You have subscribed to alerts for Peter Lawrence Kane.

You have been added to Peter Lawrence Kane's favorite list.

You can also sign-up to receive email notifications whenever Peter Lawrence Kane releases a new book.