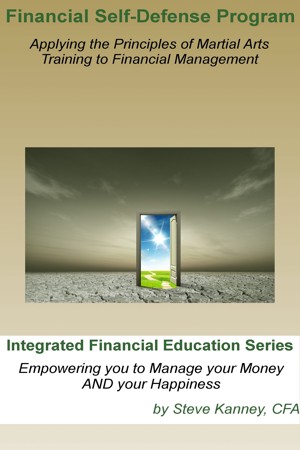 Recent surveys suggest many people feel overwhelmed by the complexity of managing their personal finances. Yet without the ability to rely upon a pension for retirement, they must take more responsibility for their lifetime spending needs. Recognizing that our financial system is broken, they do not know where to turn to find advice. Many people do not want to manage their own finances, but are not completely comfortable with the alternatives.

Whether one only wants to find a trustworthy adviser or become self-directed, this book and supporting links simplifies the process. First the book helps the reader identify the areas of finance that will produce for them the greatest economic benefit. By limiting the areas of finance studied, the overwhelming task becomes manageable. Then unlike some rules of thumb common in the financial media, real depth in thought is needed to be certain that one’s efforts are genuinely directed towards achieving their goals. Once a framework is developed for financial decisions, it can be applied quickly and easily to any decision that may arise over time. If one wishes to continue their financial education, cost effective resources are suggested.

In order to achieve both financial health and happiness, we need to seek advice from someone trained in both. Martial arts training is an optimal way to learn how to engage in an activity in the most effective manner while still enjoying life to its fullest. According to the martial approach, one needs philosophical understanding as well as technical abilities. Steve Kanney, CFA began the study of martial arts in 1972 and Aikido in 1978. He further studied the philosophical aspects of the martial arts through meditation training, particularly Zen, beginning in 1996. The connection between Zen and Japanese martial traditions is quite extensive. He opened Scarsdale Aikido in 2003 for the purpose of teaching both the philosophy and the art and currently continues as the chief instructor.

Many problems/concerns in the financial arena have been well-resolved in the institutional marketplace, but not addressed with individuals. Steve Kanney, CFA simultaneously pursued a career in the institutional financial markets beginning with a Bachelors Degree in Finance from Emory University in 1983. He completed a CFA in 1993. He worked in institutional fixed income sales based upon asset/liability matching analysis from 1984 up until 2000, 11 years of which was at the infamous Lehman Brothers. Recognizing the long trend of decline in the ethical conduct in the brokerage segment of the financial industry, he left Lehman and began work at a hedge fund as a risk manager in 2001. He also developed some statistically-based trading strategies for the interest rate markets during that period. In late 2003 he began a martial arts school, Scarsdale Aikido. He left his formal occupation in finance at the end of that year. He managed assets privately (without fees) for individual investors from 2004 onwards.

He has a unique background for bridging the gap between the strategy of martial arts and the incremental analysis of finance. As the chief instructor of a Scarsdale Aikido he teaches the philosophy both through physical movements and discussion on a daily basis. He also worked extensively with the complex nature of the financial decision-making matrix advising multi billion dollar banks, investment advisors and to a lesser degree insurance companies for many years. As the skills and discipline of institutional finance continue to trickle down to the individual investors through improved technology, his skills are particularly cogent. Combining the philosophy of martial arts with the technical knowledge of finance can help anyone, regardless of their financial status, find a greater sense of purpose in life and express it with a more precise financial acumen.

You have subscribed to Smashwords Alerts new release notifications for Steve Kanney.

You have been added to Steve Kanney's favorite list.

You can also sign-up to receive email notifications whenever Steve Kanney releases a new book.