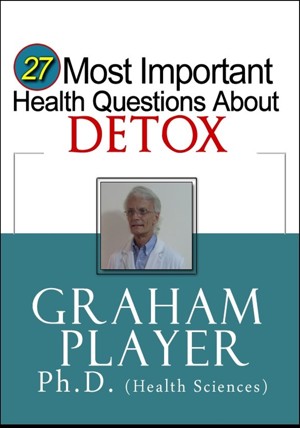 By Graham Player
Player is a medical researcher, nutrition specialist, and health consultant. His book is based on his survey of what people want to know about Detox.
Chapters include Basic Detox, Cleansing, Flushing and Fasting, What Detox Does, Natural Detox -Toxins & Your Body, When to Detox & For How Long, Diet & Lifestyle for Detox, Detox Safety & Risks, Specific Focus on Health Conditions, Detox for Cancer. More
Detox for Health
Not For Dummies: Fast Answers to Your Problem!
Your Quick Learning Guide: Save days of research, get trusted and credible information.

“Quite impressed. It’s authoritative without being preachy, comprehensive but easy to read” … Dr. Angel Gomez M.D.
“The information written in this book is comprehensive, significant, and consistent with general medical knowledge and practice”….Dr. Jose Vergara M.D.

Player is a 30-year medical researcher, nutrition specialist, and health consultant. He has a Ph.D. in Health Sciences and a degree in Chinese medicine. He has published over 200 health articles, 10 books and lectured on a wide range of health topics.

Player uses a common-sense approach to writing this latest e-book series. His book “27 Most Important Health Questions About Detox: Not For Dummies Answers (27 Most Important Health Questions Series)”, is based on his comprehensive survey of what people want to know about Detox. As part of his research, he compiled a list of 1000 questions. From those, he chose the 27 most important questions that most people wanted to be answered.

Player promises an accurate, quick learning experience to better inform you before you visit your doctor.

The most Popular Question in the Survey and the Internet – “What happens when you Detox?”

Answer: When you choose to follow a detox program for several days, the effects on your body are apparent. It is not uncommon for blood sugar to drop, to experience dehydration, hunger, dizziness, and even nausea. With no food intake, your body will slow down its metabolism in order to conserve its energy. If the fasting continues, your body will turn to the stored fat, break it down, and use it as source of energy.

In Chapter 3: The Basic Detox, Cleansing, Flushing and Fasting
In Chapter 4: What Detox Does
In Chapter 5: Natural Detox -Toxins & Your Body
In Chapter 6: When to Detox and For How Long
In Chapter 7: Diet & Lifestyle for Detox
In Chapter 8: Detox Safety & Risks
In Chapter 9: Specific Focus on Health Conditions
In Chapter 10: Nutrition Plan: Stepping Outside the Box
In Chapter 11: Chinese Medicine Approach for Health
In Chapter 12: Detox for Cancer

Born into the family of an eminent medical practitioner in Australia laid the foundation for Graham's interest in the human body, its function, and the many health related subjects.

Most of the formative years of his life before five years of age he spent in a wheelchair due to a hip disorder. He would accompany his father to hospitals and calls and became very interested in all things of a medical nature. Although Graham had the best medical treatment available back in the 1950's for his hip, it was not able to be healed by western medicine. Surprisingly it was the Chinese medical treatment approach that eventually cured his problem. Consequently his medical awareness began at this stage and became the seed for further knowledge fertilized later in life to blossom into an insatiable thirst for an understanding of the function of the human body in health and sickness in both the western medicine and the Chinese medicine models.

*Exposure and influence as a child to Chinese healing systems involving medicine and exercise
*Upbringing and influence from living in a family of western medical practitioners
*Passion and interest in health and medicine
*Education, study and research in both western and Chinese medicine
*Ph.D. doctoral research and thesis: "Energy as the Link Between Chinese and Western Medicine"
*Clinical practice as an acupuncture and energy medicine specialist in Australia, United Kingdom and Hong Kong where he has been living since the mid 1980's

His aim is not only to write health books but to provide something different that is useful, practical and relevant to people seeking to understand their health challenges and who wish to participate in the improvement and maintenance of their own health and wellness.

Graham's approach to the writing of his latest eBooks series ("27 Most Important Health Questions") is based on his own surveys of what people actually want to know about various health topics. He typically compiles over a 1,000 questions on the health topic and then narrows them down to what he considers are the 27 most important health questions about that topic.

Why 27? Because he believes there is an optimal point at which a carefully selected number of questions can answer most of what people want to know, and is manageable and quick to convey the knowledge and understanding that people are seeking. It is difficult to fully give this knowledge in less than 27, and any more makes the topic too large and complex for the reader's rapid comprehension. The information in his eBooks is provided in a short and useful quick-read format and provides a broad overview of the topic, its problems, and the way forward. To learn more about Graham Player and this series visit www.27mostimportanthealthquestions.org

You have subscribed to alerts for Graham Player.

You have been added to Graham Player's favorite list.

You can also sign-up to receive email notifications whenever Graham Player releases a new book.