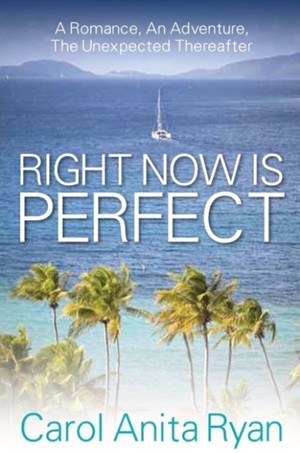 Right Now Is Perfect: A Romance, An Adventure, The Unexpected Thereafter

By Carol Anita Ryan
Rated 5.00/5 based on 3 reviews
It's an adventure in paradise when a mid-life divorcee ditches a career in IT to sail across the South Pacific with her lover and two friends. But there is more! More
The story of an imperfect romance on a crowded sailboat unfolds as the four-person crew sails among the beautiful, isolated islands of the South Pacific.
French Polynesia, the Cook Islands, Samoa, Fiji and New Zealand are some of the landfalls you’ll discover along the way.
The story moves to the west coast of America and Mexico as the two sailors re-adjust to life on land. Will their love affair survive? Just when it seems it might, an unexpected diagnosis throws everything into question.
The book gives the reader an honest account of what it's like to become progressively disabled. 'Right Now Is Perfect' is a good reminder to make the most of what you have and to enjoy the moment.
Available ebook formats: epub mobi pdf rtf lrf pdb txt html
First 20% Sample: epub mobi (Kindle) lrf more Online Reader
pdb
Price: $3.99 USD
Buy Add to Library Give as a Gift
How gifting works
Create Widget
Tags: romance adventure travel south pacific sailing ms becoming disabled
About Carol Anita Ryan

Carol always wanted to be an anthropologist and/or a travel writer, but to actually earn a living she had a career in Information Technology. She pursued her other interests by traveling extensively between positions. Her last traveling adventure is the basis for her memoir, Right Now Is Perfect. This story concludes with the unexpected diagnosis of Primary Progressive Multiple Sclerosis, and the impact of progressing disability. She lives in northern California with Napoleon.

Reviews of Right Now Is Perfect: A Romance, An Adventure, The Unexpected Thereafter by Carol Anita Ryan

I forgot to do the rating

(reviewed 4 days after purchase)
Tom Kando reviewed on Feb. 22, 2013
(no rating)
Carol Anita Ryan has written a beautiful book about her trans-Pacific voyage by sailboat, and also about love, misfortune and courage. The novel is complete, with romance, adventure and tragedy. It is flawlessly written, thoroughly enjoyable, sexy, appealing and heart wrenching.

First the adventure: My, my! As a landlubber, I already get uncomfortable when I step on a small sailboat. Crossing the immensity of the Pacific on such a craft would petrify me. Carol, her boyfriend Bill, Bill’s sister Mary Jo and Mary Jo’s husband Charlie sail the Velela from Mexico to New Zealand! Charlie is captain and co-owner of the Velela with Bill.

How four people (including siblings and in-laws) get along for this lengthy voyage, cooped up on a tiny vessel, is beyond me. Me and my siblings and in-laws, three days is the maximum we can be with each other. After that, we’d kill each other.
But Carol spends nine months at sea with her foursome! There is some minor conflict (about money, supplies, whathaveyou), but nothing serious. They finally separate after nine months - Carol and Bill fly home from New Zealand.
For the better part of nine months, they brave thunderstorms, thirty-foot waves, dead seas. We also learn the intricacies required for such an incredible adventure - GPS of course, safety requirements, solar power for electronic gear, desalinization equipment as back up, how to schedule turns at night watch, etc.
It takes nearly a month just to reach the very first islands - the Marquesas in French Polynesia.
Then on to Tuamotu, Tahiti, the Cook Islands, Samoa, finally New Zealand. Sometimes they stay on an island group for a whole month, for example in Papeete, or Fiji. They even toy with the idea of moving there permanently. Fascinating. I actually went to a map of the Pacific to follow their vicissitudes.
The book is a great travelogue - the cultures, culinary delights, people of the South Seas. They meet many people, some of them native, many of them adventure sailors like themselves. There are descriptions of magnificent luminescent sea life and star-studded skies at night, whales, schools of dolphins, (I was reminded of the recent movie “Life of Pi”). The book also has a bunch of nice photos.

The last part of the book comes as a shock. It takes place mostly on the West Coast, primarily in California. As the 20th century winds down, Carol is struck by misfortune. But her courage and positivity shine through. Wonderful narrative, and wonderfully uplifting.

Excellent book about life before MS and then after, and a great reminder about being very careful when choosing a life partner. Not all men are created or behave equally. Although it seemed difficult for her to experience, Carol was fortunate to discover the truth about Bill before it was too late. A 5-star read.

(reviewed 2 days after purchase)
Bruce Bongar reviewed on April 19, 2011
(no rating)
Carol Ryan has crafted a wonderful touching poignant book about her life and her triumph. It is not only only a superb story, but an inspirational message to everyone about the fragile nature of life, and how crucial it is to "live life to the lees" - basically to live one's life to the fullest - that every day counts.

It is also an engaging tale that brings one in touch with some exotic experiences (for those who have never ventured out in the deep blue sea). What is particularly impressive is that this is the first work for this writer; hopefully we can anticipate a follow-up where we see the journey continue.

In summary, a terrific book. Going to give it to a few friends of mine who need to get some perspective on life, and remember how vital it is to live in the moment and cherish every great day we have on this planet.

(reviewed the day of purchase)
wheatweaver reviewed on Nov. 23, 2010

a very well written autobiography that leaves one yearning for more. I finished the book in 2 sessions, anxiously awaiting the ending. Hope to read more from this newly aspiring author.

You have subscribed to Smashwords Alerts new release notifications for Carol Anita Ryan.

You have been added to Carol Anita Ryan's favorite list.

You can also sign-up to receive email notifications whenever Carol Anita Ryan releases a new book.