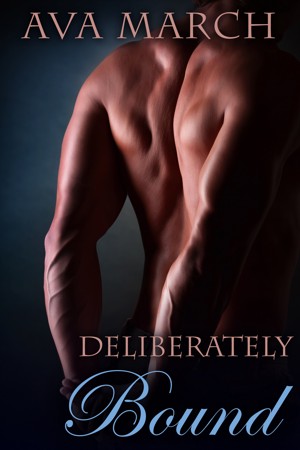 Rated 4.00/5 based on 3 reviews
Lord Oliver Marsden loves books, but what he loves even more is submitting to his lover, Lord Vincent Prescot. A large purchase for his bookshop, however, puts Oliver in the mood to push Vincent’s boundaries in bed farther than ever before.

This short story is #3-1/2 in The Bound Series. More
Lord Oliver Marsden loves books, but what he loves even more is submitting to Vincent. A large purchase for his bookshop, however, puts Oliver in the mood to push Vincent’s boundaries in bed farther than ever before.

Lord Vincent Prescot is more than happy to have his lover home. Two days without Oliver were far too long in Vincent’s opinion. But before he can toss his lover onto the bed, he realizes Oliver has his own plans for the evening…

Ava March is a bestselling author of sexy, emotionally intense M/M historical romances. She loves writing in the Regency time period, where proper decorum is of the utmost importance, but where anything can happen behind closed doors. With over fifteen works to her credit, her books have been finalists in the Rainbow Awards and More Than Magic contest, and deemed ‘must-haves’ for Historical M/M romance by RT Book Reviews readers. Visit her website at www.AvaMarch.com to find out more about her books or to sign-up for her newsletter.

Again, this is my first foray into Ava March's Bound series and as I said yesterday in my review of "Deliberately Unbound," Regency is one of my least favorite genres because I dislike period pieces, generally. All that said, once more I got a good feel for the characters right away and had no sense of loss from not having any pre-existing knowledge of the series. I didn't "need" the series to get into this story but I did feel I "knew" the characters well enough after one story (yesterday) that I should recognize them. I did...sort of.

In this story, the D/s roles are reversed and while Oliver finds it easy to be a switch, Vincent struggles with the role reversal. This fit with the men's personalities as I knew them from "Deliberately Unbound" but I didn't feel like the lead-in to the sex scene adquately addressed the emotional states of the Dom-turned-sub. I've been a switch myself more D than s and it's quite the mental trick, more than "flipping a mental switch" to change roles. I wanted Vincent to struggle with it more before he became a happy go lucky sub. He didn't need to "talk about it", just have mental doubts, fears, trepidation. That wasn't there. Took one star off for the lack of credibility there but then added it back in once I finished the sex scene because Oliver as a sub turned Dom was amazing. Plus THIS time, unlike when I read "Deliberately Unbound," I definitely got a good arousal going from the sex scene so it worked for me despite still being focused primarily on anal penetration (not my personal interest).

I felt the characters in this story had a better-developed chemistry here than in "Deliberately Unbound" but couldn't really say why. I felt the sex was better but again, couldn't say why. I felt the writing was top-notch except for that lack of character development mentioned above. All in all, I would read more by this author but probably won't. I really dislike Regency. If I "had to" read Regency, I would probably not mind reading Ava March's tales of Oliver and Vincent (whereas other Regency romance annoys me all to hell).

Despite not being interested in period pieces, I did particularly like the fact Ava March makes a specific point to try to describe sex toys of the time as they might really have been. Accurate or entirely fictionalized, the author's effort to lend authenticity in the details to the period she's depicting was admirable. Highly recommended for anyone who likes period pieces.

You have subscribed to Smashwords Alerts new release notifications for Ava March.

You have been added to Ava March's favorite list.

You can also sign-up to receive email notifications whenever Ava March releases a new book.