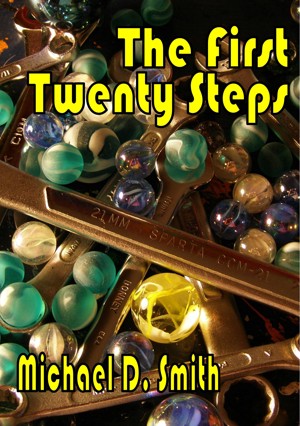 An ex-convict finds himself mixed up in a motorcycle gang’s plan to heist a hyperspatial supercomputer. More
Just released from six years in prison and unsure how to meet basic needs, Harry finds a kindred spirit in Roberta, in thrall to a depraved motorcycle gang. The two decide to infiltrate Harry into the gang so that he can eventually free her from it. But Alexander, the passive-aggressive leader of the Cerberean Knights, leads them into a major crime this evening as he seeks to pay back favors from the corrupt city council of One-West. As the motorcycle attack on the Dataflux computer building turns terrifying and surreal, Harry and Roberta find themselves outgunned by another biker gang belonging to the mysterious billionaire Richard Mullein, who intervenes to protect the top secret navigational equipment for his Cathedral Spaceship.
Available ebook formats: epub mobi pdf rtf lrf pdb txt html
First 20% Sample: epub mobi (Kindle) lrf more Online Reader
pdb
Price: $2.99 USD
Buy Add to Library Give as a Gift
How gifting works
Create Widget
Tags: prison love story science fiction robbery motorcycles computers gangs spaceships bikers cybercrime
About Michael Smith

Michael D. Smith was raised in the Northeast and the Chicago area, then moved to Texas to attend Rice University, where he began developing as a writer and visual artist. The first six novels in his Jack Commer science fiction series, The Martian Marauders; Jack Commer, Supreme Commander; Nonprofit Chronowar; Collapse and Delusion; The Wounded Frontier; and The SolGrid Rebellion are published by Sortmind Press. In addition, Sortmind Press has published his literary novels Sortmind, The Soul Institute, Akard Drearstone, CommWealth, Jump Grenade, and his novella The First Twenty Steps.

Smith is currently a librarian at McKinney Public Library in McKinney, Texas. In his career he’s done extensive programming for adults, including book talks and author presentations, and has also marketed libraries through presentations and contacts with local media. His work includes technical assistance for eBooks and eAudiobooks.

Reviews of The First Twenty Steps by Michael Smith