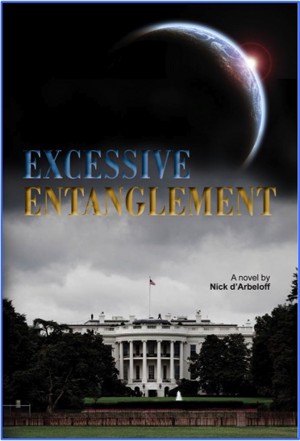 By Nick d'Arbeloff
Excessive Entanglement is a riveting new political thriller, described by one reviewer as "Michael Crichton meets West Wing." While taking the reader on a wild, action-packed ride from Washington DC to Beijing to the L5 Spaceport, the book gives readers a front row seat as opposing political forces battle for control of a brand new world. More
President Virginia Belknap is one year into her second term when a NASA scientist discovers a new planet with an atmosphere similar to Earth.

Embracing the event, Belknap turns a one-way mission to colonize this new world into her grand calling. The mission seizes the world’s imagination.

But as the coolheaded and competent Belknap starts to assemble experts from different nations to plan all aspects of this enterprise, religious conservatives—led by an earnest evangelical named Randall Reese—rise up in outrage and indignation. They view Belknap’s plan as the blueprint for the Godless perpetuation of the human species.

As the political machinations of Reese and others put the launch at risk, a broader and darker conspiracy takes shape that threatens to obliterate the ship, its crew, and even the new planet itself.

Nick d'Arbeloff was born and raised in Cambridge, Massachusetts.

After graduating from Georgetown University with a degree in English literature, Nick began a successful career in high technology. In the 1990s, he co-founded one software company and founded another.

As the threat of climate change became increasingly apparent, Nick was invited to train under former Vice President Al Gore in 2006 as a representative of The Climate Project. At about the same time, he took on the challenge of building a new non-profit organization to leverage New England's high-tech legacy and make the region a leader in providing clean energy solutions to the global marketplace.

His first novel, Excessive Entanglement, is a political thriller cleverly described by one reader as "Michael Crichton meets West Wing." While taking the reader on a fun, fast journey from Washington DC to Beijing to the L5 Spaceport, it asks the reader to give thought to how mankind might approach an opportunity to build a completely new civilization from the ground up.

He is currently at work on a second novel; a political thriller involving terrorists who threaten to unleash nuclear mayhem unless the developed world acts to save itself.

You have subscribed to alerts for Nick d&#039;Arbeloff.

You have been added to Nick d&#039;Arbeloff's favorite list.

You can also sign-up to receive email notifications whenever Nick d&#039;Arbeloff releases a new book.