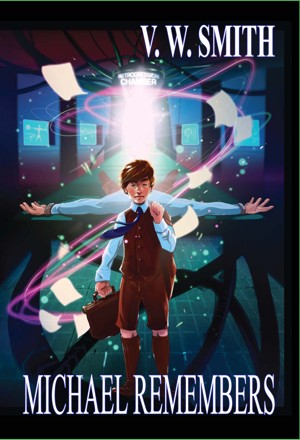 By Vassar Smith
MICHAEL REMEMBERS is not just an amusing science-fiction novel but also a scathing social satire decrying the corruption and subversion of America's once-vaunted legal, judicial, and political system. The Retrogression Procedure is allegorical for the draconian sentences handed down routinely by judges nowadays. More
Book 2
Michael Tadlock must come to terms with two traumas. When his adoptive parents, the Farrells, are suddenly killed (innocent victims in a crime war), Michael, legally compelled to go live with his aunt, must leave the home and community he has grown to love. He adapts well enough to school and life in a small town, but notices a troubling phenomenon: While his body began to mature at a comparable time after his first Retrogression Procedure this time (when, by all rights, he should have the development of a boy in his mid-teens), Michael doesn't look a day over 11. Doctors tell him that the second Retrogression Procedure has adversely affected his pituitary gland, so that his adolescence/maturation will be significantly delayed, but probably not aborted with his substantial mental and financial resources, Michael (already a college graduate twice over) applies to Stanford and is accepted to earn a Ph.D. in history. So, he does. Ironically, though, as a known retro Michael is treated so badly by his "liberal" fellow students the first year, that thereafter he lives off campus in a neighborhood where he is accepted as a "regular" kid, even quite well liked. At last his body begins to mature again, but even after receiving his Ph.D., Michael finds all academic job offerings on Earth closed to him because of his retro status. Still, he doesn't give up. At Burroughs University on terraformed Mars he is welcomed and appreciated. Michael, at last an adult again, meets the love of his life, gets married, has three sons, and enjoys a state of happiness and fulfillment that he never before thought possible.

V. W. Smith was born in Memphis, Tennessee and has lived most of his adult life in California. He earned and received his Ph.D. from Stanford University. He has been internationally published as a poet and humorist as well as a serious scholar and translator or Russian literature.
His published translations include the novels BAD DREAMS and CONSOLATION by F. K. Sologub, and numerous poems by Pushkin, Lermontov, Sologub, Blok, and other Russian masters. Collections of Smith's original poetry include: BYZANTINES AMOK (1990), UNDER THE LIMERICK TREE (1991), THE OVEN-BIRD CHORUS (1993), and THE CALIPATRIA TRIOLETS (2008).
BAST'S ASSIGNMENT is the third in a series of exciting, original novels that employ elements both of future fantasy and of social satire. Its story begins some three Earth years after the ending of the second book. That novel, BAST'S RECORD, is a sequel to Smith's uproarious satirical novel MICHAEL REMEMBERS, published by Midnight Express Books in 2012.

You have subscribed to alerts for Vassar Smith.

You have been added to Vassar Smith's favorite list.

You can also sign-up to receive email notifications whenever Vassar Smith releases a new book.