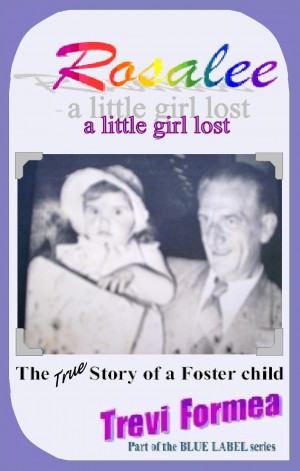 At the age of thirteen weeks, Rosalee was released from hospital and into the care of a foster family.

Rosalle lived with her foster family until two, when the department decided to put her up for adoption.

Rosalee's foster mother Rosie, decided to write the department and beseech them to rethink their actions. Why take Rosalee away from the only parents she ever knew?

TREVI FORMEA is the pen-name of Jo-Anna Rose.

She is an Australian 'Baby Boomer' raised in the southern suburbs of Brisbane, Queensland, and was born the youngest of four children (refer: A BABY BOOMER - At any age).

In 1966, when 'Trevi' was 15, she won an essay competition which posed the question - 'What would you do if you were cast away on a deserted island with Elvis Presley?' The competition was organized through the once popular, but now defunct magazine - EVERYBODY'S. Their first prize from each state Australia wide - was a week for two, all expenses paid including air-fares, to beautiful Brampton Island Resort situated in tropical Queensland's Barrier Reef. Trevi was their youngest contestant and her essay impressed the sponsors and judges so much, that they 'awarded' her with a 'junior' category and equivalent prize. Trevi took her mum with her on the holiday.

Trevi was raised a Catholic, but disillusioned after 33yrs, went searching for the truth in other religions, including Mormon and Pentecostal - finally becoming a Lutheran, to which she has remained to this day. Having had four weddings and a funeral, her third marriage in 1996, was the shortest lasting only 29mths (refer 'KUKLA MOU - The Little Greek Princess'). Trevi was suddenly widowed at 47 years old, with her two youngest daughters Renee 16 and Jackie 6 to raise. Her youngest Jackie, suffering from Asperger Syndrome (refer 'JACKIE PETER PAN').

After relocating to Russell Island in Queensland's south-east corner in August 2002 with Jackie - now 9 yrs old and her last husband, Trevi took on the volunteer position of reporter with their local paper 'The Island Spirit'. Not only as their only reporter but managing advertizing and their paper formatting. Trevi has also had miscellaneous poems published through the island's 'Writer's Circle', as well as various short stories in other popular magazines including 'That's Life'.

In March 2013, Trevi met a local couple (Dennis and Jeannie) who were new writers themselves, and together they introduced her to 'self-publishing' on e-readers, encouraging Trevi to publish her stories through smashwords.com. A whole new world for writing opened up, and Trevi became a die-hard fan of and contributor to, the delights of modern technology.

The 'BLUE LABEL' series are based on Trevi's own life experiences growing up and throughout her life. They can be either read as a 'Stand Alone' story, or as part of an ongoing autobiography. The simplistic design of her cover serves as a visual aid for easier recognition for older readers. Trevi remains single to this day and living an idyllic lifestyle on Russell Island, where she cruises the Pacific with Jackie at least once a year. Other members of their home include Burmilla cat 'Bobby' and 'Bella' - the wonder Labrador (ref:- BOBBY MEETS BELLA - yet to be published).

If you have enjoyed any of Trevi's e-book stories, please feel free to write a review.

What an interesting story! In a short span of words, there was a build-up of desire by the reader to lift up the child out of the morass fate had placed her in. It was a rescue story on the part of the new parents, it was an insight to how much an infant is actually aware of, and it had some good medical info for reality credentialing.

A story written with HEART!
I LOVED IT TREVI Ma'am..
Very good :))

I thoroughly enjoyed this book. And I recommend it to anyone or everyone. It brought a tear to my eye. I can just imagined on the pain and heartache that Rosalee went through. Great Job Trevi! It was an enjoyable book to read

I read this story and must admit that although I'm a man, I had a lump in my throat. The story is told with great love and affection and I would've been happy to pay for the opportunity to read it. Well done Trevi!

You have subscribed to alerts for Trevi Formea.

You have been added to Trevi Formea's favorite list.

You can also sign-up to receive email notifications whenever Trevi Formea releases a new book.