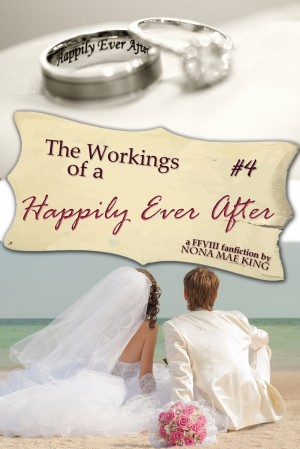 The Workings of a Happily Ever After

By Nona Mae King
Rated 5.00/5 based on 1 reviews
Zell Dincht's proposal was the culmination of what seemed a lifetime of dreams. But when they begin planning the wedding of their dreams, how hard will they work to have their 'Happily Ever After'?

*(this is a work of fan-fiction; events take place after those of Final Fantasy VIII) More
For shy Sally Regal, Zell Dincht's proposal was the culmination of what seemed a lifetime of dreams and fairytales. But when they begin planning the wedding of their dreams, tests and decisions come that make their relationship begin to change.

How hard will they work to have their 'Happily Ever After'? Will the plans for the ultimate wedding survive?

Nona King was born and raised on a 30-acre homestead outside Aurora, Oregon, in 1972. In the late '80s she began writing feature-length plays, young adult fiction, and Christian romance novels. From '99 to '05 she experimented with myriad worlds and character-types through VG fan-fiction under the pseudonym Mintbaby. She is the author of more than 30 novellas and short-stories, including fan favorites such as the 'Bookworms and Booya!' series, the 'Terra' saga, and 'A Rose by Any Other Name.'

In 2006 King moved to the Seattle area where she met and married her husband and once again focused on her original fiction, publishing one paranormal fantasy and four romance novels from 2008 to 2014. She plans to release the extended edition of book one of her paranormal fantasy, 'To Save a Soul', in the coming months, as well as 'Para', the prequel to the paranormal fantasy series (The Soul Cycle). Other projects include her young adult fiction series, Changing Scenes, her epic fantasy, Resurrected Honor, and her first romantic comedy, The Dating Formula.

King has dedicated herself to writing true-to-life characters, be they villain or hero, so readers can experience life and its many passions. All her stories focus on faith, honor, and the importance of communication and trust in our relationships.

More warm fuzzies. Very cute couple and a very sweet romantic story. Must read for those who love romances.

You have subscribed to alerts for Nona Mae King.

You have been added to Nona Mae King's favorite list.

You can also sign-up to receive email notifications whenever Nona Mae King releases a new book.