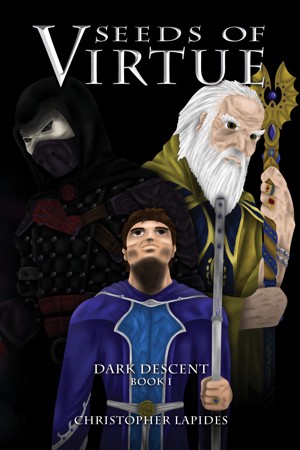 By Christopher Lapides
Rated 3.50/5 based on 2 reviews
I fight for good.

What makes a man virtuous? Is it how he was raised? The people he surrounds himself with? Or is it something that comes from his very soul? For the young Druzeel Sesstar, it is the way he has always lived his life.

Regardless of the tragic death of his parents, Druzeel stills sees the world filled with honor, kindness, and integrity, beliefs encouraged... his adoptive father Gr More
I fight for good.

What makes a man virtuous? Is it how he was raised? The people he surrounds himself with? Or is it something that comes from his very soul? For the young Druzeel Sesstar, it is the way he has always lived his life.

Regardless of the tragic death of his parents, Druzeel stills sees the world filled with honor, kindness, and integrity, beliefs encouraged by his adoptive father Graeak, a powerful wielder of magic. He is content with his studies and driven to be as great a wizard as his mentor. Because of this, Druzeel has little time for the outside world. It is this isolation that has helped paint a land full of kindness and virtue, but when a powerful artifact is stolen, Druzeel will be thrust into a world that is not what he expected.

When he finds that the world is not as genuine as he was taught, will he let the hard truth affect him or will he remain true to himself? When his beliefs are challenged at every turn, the good inside him shall be tested like never before. He must hold onto his convictions or he risks losing everything, including his soul.
Download: epub mobi (Kindle) pdf more Online Reader
rtf lrf pdb txt
Price: Free! USD
Add to Library
Create Widget
Tags: adventure mystical fantasy magic epic wizards dragons evil dungeons warriors
About Christopher Lapides

"Daddy, you're the coolest daddy in my life."

Those are the words of my oldest daughter when she was only two years old. I would like to think that everyone has this view of me, except the daddy part, but reality is often very different from the mind of a child.

I was born in Anaheim, California in 1979. I created my first design with the ever reliable pencil when I was five. I have been designing ever since, though the medium has changed throughout the years. Now the keyboard, mouse, and occasional drawing pad are my tools.

In 1989, I moved to Georgia, where I continued to doodle, dream, and get in trouble for sketching while the teacher was talking. I attended Brookwood High School in Snellville. After graduating, I went on an exploratory quest, trying out Georgia State and Perimeter College before finally settling on UGA, where I graduated in 2001 with a degree in Journalism/Advertising.

I was immediately hired by a bridal magazine as an Art Director. From there I went to a small catalog company based in Stone Mountain where I worked as a graphic designer. After that it was onto Progressive Lighting where I worked as a graphic designer for four years. Now, I am currently the Creative Services Production Manager for Acuity Brands Lighting, while also doing some freelance work when time allows.

During those precious moments of free time, when my children allow it, I like to draw, sketch, and write. I currently live in Dacula with my family. We spend the days as all families should, playing and laughing as if nothing else in all the world matters.

Reviews of Seeds of Virtue, Dark Descent, Book I by Christopher Lapides

I agree with thiotes, although it's word usage errors more than spelling. An example would be fare instead of fair or whether instead of weather. Editors need to actually read their books instead of scanning them.

The story is fine though, with a likeable main character and an interesting cast surrounding him. The various magic encounters are entertaining.

I was enjoying it while reading, the writing is fairly engaging, but
-1 because of plenty of spelling errors
-1 because it felt unfinished, even for a book in a series. No real progress with either the main storyline or the characters and basically ending in something like a cliffhanger (which i personally hate).

You have subscribed to Smashwords Alerts new release notifications for Christopher Lapides.

You have been added to Christopher Lapides's favorite list.

You can also sign-up to receive email notifications whenever Christopher Lapides releases a new book.