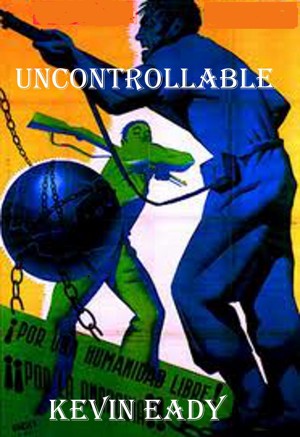 Kevin lives in the West Country.

Over the years he has worked as a postman, a labourer, in a booksellers, a zinc smelter and latterly in an I.T. role for an engineering firm.

He's always been a bit of an awkward so & so. His favourite record is Captain Beefheart's "Trout Mask Replica" and when he was younger his favourite colour was yellow.

Reviews of Uncontrollable by Kevin Eady

Kevin Eady's 'Uncontrollable' looks at the history of the anarchist movement in the twentieth century from the point of view of a single man, Buenaventura Garcia. Through his own sincere commitment and through chains of circumstance, Garcia is a participant in a great many of the historic events in which anarchists were involved.

Garcia is a thoroughly well-drawn character, and tells his own story with humour and clarity. He is, at heart, a deeply humane man, but honest enough to admit when he does not quite live up to his ideals. War and oppression force him, at times, to acts of violence, but he does not relish these, and throughout his long life he maintains a core vision of loving co-operation and mutual respect that is at the heart of anarchist philosophy. If at times he is a tad repetitive in his condemnations of injustice, this is very much in his character, and indicative of just how much he has to cope with.

The writing is well-paced, maintaining interest throughout. Although it deals with often grim and harrowing events, there is a 'reader-friendly' lightness of touch to the style. Whilst, now and then, the writer does - as a previous review has indicated - use an inappropriately British turn of phrase, it is also evident that he has immersed himself in Spanish life and culture, and there is a wealth of convincing detail.

I would recommend this book for its eye-opening account of events that have not been adequately covered by history books; for its portrayal of an authentic, likeable central character and many memorable subsidiary characters; and for its economic and well-paced writing style. 'Uncontrollable' is a real page-turner. Pay up and download - you won't regret it.

(reviewed 43 days after purchase)
kitty dcosta reviewed on April 20, 2013
(no rating)
This is an exciting and interesting story of one man, an anarchist during the Spanish Civil war. The hero of the story, El Coco, has a comic -tragic birth over which he has not control and his life has a similar feel throughout the book. It’s uncontrollable. Having said that how much control do any of us have over our lives? Adventure follows adventure and each of our hero’s adventures of fighting on the side of the anarchists, is sadly curtailed, rather abruptly by finding himself on the wrong side of the conflict. He finds himself in Spanish prisons, Hitler’s concentration camp and Stalin’s gulags. I found the lack of gratuitous violence in prison a relief. El Coco does not display any self-pity, and is strongly committed to the cause of liberation and equality and this makes him a sympathetic hero.

At the same time as weaving an excellent story about one man’s life, the author brings to life the political history of the Spanish civil war. There was so much I learned about the war, the way that it moved from one location to another, different groups forming alliances with each other during the war, the difficulty of the ordinary Spaniard’s life under Franco, the unpredictability of events and the geography of Spain, the interference and concerns of allies and the Soviet Union. The author brings to life the Spanish Civil war and I found I couldn’t put the book away and read it over a two day period. I enjoyed the unexpected ending because it confirmed my suspicions all along. I recommend that you read it to see if you agree.

I was reminded of the films made recently about Che Guevra and thought this book would translate very well into such a movie.

Buenaventura García, 101-year-old Spanish anarchist, narrates his life story to his great-grandson. Forced into exile by the Spanish Civil War, he begins a journey that lands him in nearly every prison and labor camp in Europe and Asia. The story reaches its climax in a metaphysical experience induced by hallucinogenic mares' milk offered by a Siberian shaman with whom he was having a sexual liaison in the Soviet Gulag.

"Uncontrollable" and I developed a love-hate relationship. It is an intriguing tale, well paced, and Buenaventura García offers the reader a highly engaging narrative. It is, however, told with a British accent where one would expect the voice to be Spanish. From a personal viewpoint my inner anarchist could only bond with part of Buenaventura's politics. He longs to exist in a Utopian sort of workers' paradise free of government, free of capitalism, free of property, free of religion and never questions the validity of the concept despite witnessing firsthand the abject failure of the Stalinist model. Late in life he survives on reparations from both the Spanish and German governments but apparently sees no hypocrisy in this.

The book ends with a series of bizarre twists that leave the reader's head spinning and wondering if somehow he had ingested some of the shaman's mares' milk.

You have subscribed to Smashwords Alerts new release notifications for Kevin Eady.

You have been added to Kevin Eady's favorite list.

You can also sign-up to receive email notifications whenever Kevin Eady releases a new book.