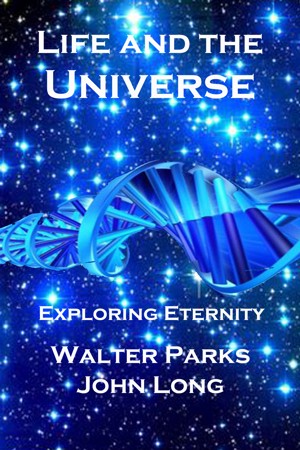 Life and the Universe

By Walter Parks
Rated 5.00/5 based on 1 review
Just what is life? What do we really know about God; about the universe? Is there intelligent life out there; is there more than one universe?

We tackle some of these biggest questions of mankind with the confidence that we can arrive at the truth and convey that truth in comprehensible narrative.

Are we likely to encounter aliens in our lifetime?

Is there more than one universe? Will parallel universes soon be proven beyond a shadow of a doubt?

These are just some of the questions that two friend have been asking since we were in grammar school together over 70 years ago. We have continued to speculate with each other about life, the universe, and the great unknowns that cause mankind to be such a special species here on earth.

We have been living in different states, Mississippi and Florida, since high school graduation. One of us became an aerospace engineer and later a Vice President at Lockheed Martin Aerospace Company. The other became a trial attorney and went into private law practice. But we still meet, write, email and discuss our evolving thoughts and ideas.

We recently decided to meet in Homosassa Springs Florida for a few days to chat about our ideas and see just what we really think about the answers to all the great questions of life and the universe.

And although we did not discuss it outright, it was obvious that we may have been motivated to have this meeting because of increased interests in seeking answers to the questions: do we have souls and if so, is there an afterlife.

We met in the wilderness of the springs to discuss and try to find the best answers available based on what mankind has learned to date and based on the life long questioning of two very curious old men.

A series of modern day scientists and physicists from Einstein to Hubble to Heisenberg to Kaku to Hawking have postulated theories in an attempt to answer our most complex questions. Their once unconceivable theories are rapidly becoming acceptable and practical as billions of dollars are now being spent to test and prove the validity of their theories.

We collected their findings and theories and drew our own conclusions about Life and the Universe and are publishing them in this book.

We tackle some of the biggest questions of mankind with the confidence that we can arrive at the truth and convey that truth in comprehensible narrative.

We felt that our findings and understandings would be of general interest to a wide audience, especially the 79 million baby boomers in the United States. We also thought that young people who are just beginning to form their opinions of life and the universe would find our materials interesting and useful.

We hope you enjoy our efforts and even if you cannot agree with all of our conclusions we hope this book will stimulate you to continue to seek the truth about everything that is important to you.

When we look into our deep oceans we see extreme life forms living even in the very hot volcanic vent flows from the ocean floor. Some of these life forms look like monsters from our imaginations. We have provided pictures of these alien creatures.

We have found life in the extreme arctic conditions at the poles. Life here on earth occupies all environments no matter how severe.
This suggests that we should therefore expect life on essentially all of the trillions of planets in our universe that have life acceptable temperatures.

We believe that we will soon learn that millions if not billions of these alien life forms are intelligent; and thousands if not millions are more advanced than are we. It's just a matter of statistics and the older age of so many of the planets.

All of our speculations lead back to the question: is there a God. We attempt to provide our views and the science on which we base our views.

Hi! Thanks so much for your interest in my books!
My principal interests are true stories of the unusual or of the previously Unknown or unexplained. I have occasionally also written some fiction.
I was born in Memphis Tennessee and grew up in Saltillo Mississippi, a small town near Tupelo Mississippi. High School life was dominated by watching the rise of our local Elvis. I was editor of the High School Paper and had plenty to write about. I guess this was the beginning of my writing career.
After graduating from Mississippi State University as an aerospace engineer I moved to Orlando Florida and worked for Lockheed Martin for 24 years. I advanced from an aerospace engineer to a Vice President of the Company and President of the Tactical Weapons Systems Division.
Education Activities
I continued my education throughout my career with a MBA degree from Rollins College and with Post Graduate Studies in Astrophysics at UCLA; Laser Physics at the University of Michigan; Computer Science at the University of Miami; Gas Dynamics at MMC and Finance and Accounting at the Wharton School, University of Pennsylvania.
While at Mississippi State University I was on the President’s Honor List and in the honor societies of Tau Beta Pi, Sigma Gamma Tau and Blue Key.
I received a scholarship from Delta Air Lines based on my academics and performance.
I was in ROTC and the Arnold Air Society where I participated and toured as a member of the precision Drill Team. I also attended the summer survival training at Hamilton Air Force Base in California.
I was selected for Who’s Who among Students in American Universities and Colleges.
I was a speaker for several technical organizations including the American Institute of Aeronautics and Astronautics.
After Retirement from Lockheed Martin Aerospace Company
After retirement from Lockheed I formed Parks-Jaggers Aerospace Company and sold it 4 years later.
After selling my aerospace company I formed Quest Studios, Quest Entertainment and Rosebud Entertainment to make films at Universal Studios. I produced 11 films, directed 7 films and wrote 5 film scripts produced at Universal Studios.
I won the National Association of Theater Owners Show South Producer of Tomorrow Award.
I then formed UnknownTruths Publishing Company to publish true stories of the unusual or of the previously Unknown or unexplained. These include books about past events so unbelievable that most people have relegated them to "myths".
I have published 37 books in eBook format, Paperback format and as Audio Books. I have an additional 12 books in development.

Reviews of Life and the Universe by Walter Parks

Many of us can relate to two lifelong friends pondering through the years whether there is a God. The conclusion is that there is no definitive answer. It seems likely we will discover life on other planets. Does that mean there is a God? God or no God, life is truly a marvelous miracle. This book reminds you of that beautiful fact. Well-done.

You have subscribed to Smashwords Alerts new release notifications for Walter Parks.