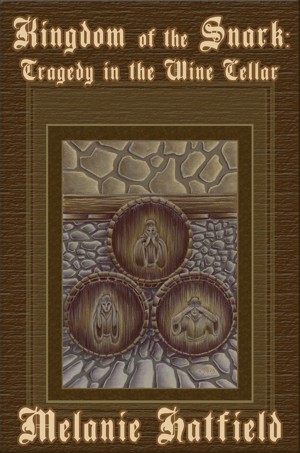 Kingdom of the Snark: Tragedy in the Wine Cellar

A short story from the adult humor oriented world of "Kingdom of the Snark." More
As noted by the not so humble narrator in “Kingdom of the Snark: The Quest for the Sword,” the monastery of Quaal defended their home and their lives from the nunnery in what was known as the War of the Nuns. There used to be many books filled with poems and songs that go on and on (to the point of driving a reader to tears) which explained how they survived. Unfortunately (or fortunate for those who cannot endure such poetic tortures), most of these pages were lost to the ages: some books were lost, others went up in smoke when the buildings they were housed in caught fire, and some were merely misplaced somewhere and never found again. On one occasion of note a keeper’s cousin ran out of the tissue of ass wiping and thusly a few chapters were lost to his cheeks. However, a few pages did survive the above tribulations, and the “Tragedy in the Wine Cellar” is one of those tales.

Sister Ferriera, Mother Superior, and her army of nuns have attacked the monastery’s steeple during their evening prayer service. The monks and their adopted Questers-in-training are quickly surrounded and face certain death. Their only hope lies within two of their best teenage fighters. Unfortunately, Joel the Brave convinced Renee the Righteous to ditch the service and have some inebriated fun in the monastery’s wine cellar. When the murderous nuns make their way through that underground maze, it is the two warriors who are in need of rescue. Can Renee and Joel save themselves in time to rescue the monastery, or will everyone die a terrible death at the hands of horny nuns? Good thing there is plenty of wine to go around.

“Kingdom of the Snark: Tragedy in the Wine Cellar” is a short story which chronologically takes place between chapters two and three of “Kingdom of the Snark: The Quest for the Sword.” Although it was written in the style of a “ye old” fantasy, it was made to be enjoyed by adults.
Available ebook formats: epub mobi pdf rtf lrf pdb txt html
First 20% Sample: epub mobi (Kindle) lrf more Online Reader
pdb
Price: $0.99 USD
Buy Add to Library Give as a Gift
How gifting works
Create Widget
Tags: comedy fantasy kingdom snark
About Melanie Hatfield

Melanie Hatfield spent a decade in Los Angeles with hopes of becoming a television sitcom writer. That dream did not come true, but she learned how to write like a pro. She wrote her first fantasy series, Kingdom of the Snark, to incorporate her two favorite genres of comedy and fantasy. Her second fantasy series, The Chronicles of Turrack is an action-adventure spin-off from Snark. Ms. Hatfield currently lurks in her hometown of Kansas City and writes whatever she pleases!

About the Series: Kingdom of the Snark

If the fantasy works of J.R.R. Tolkien were written with the adult oriented humor of Douglas Adams, you would have "Kingdom of the Snark," a series of humorous fantasy stories.

Renee the Righteous is a young Quester who must find the long-lost Sword of Power to save her people. When at last she thinks her quest for the sword is at an end, she discovers a catch: it takes two people to claim the blade, not one, so she needs a Questing Partner for help. Too bad Renee never bothered to make any friends on her journey, and she has to put her trust in a stranger. She thinks she has found the perfect Questing Partner in Guy Smokes, a hapless Assistant Barkeep always willing to help anyone with heaving bosoms. However, Guy might just change his mind after they are attacked by lustful nun assassins and lethal men in green cloaks. Will Renee be able to claim the Sword of Power, or will she and her Questing Partner be slain instead?

Journey to a land where men are women, women are men and unicorns are jerks in "Kingdom of the Snark!"

Also in Series: Kingdom of the Snark

Reviews of Kingdom of the Snark: Tragedy in the Wine Cellar by Melanie Hatfield

You have subscribed to alerts for Melanie Hatfield.

You have been added to Melanie Hatfield's favorite list.

You can also sign-up to receive email notifications whenever Melanie Hatfield releases a new book.