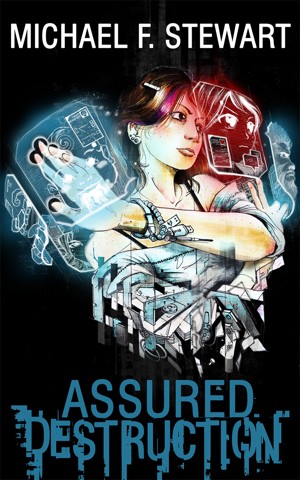 By Michael F Stewart
Rated 5.00/5 based on 1 review
You can learn a lot about someone looking through their hard drive...

The real-world consequences of Janus’ online exploits threaten to bring down her mother's computer recycling business. More
You can learn a lot about someone looking through their hard drive...

Sixteen-year-old Jan Rose knows that nothing is ever truly deleted. At least, not from the hard drives she scours to create the online identities she calls the Shadownet.

Hobby? Art form? Sad, pathetic plea to garner friendship, even virtually? Sure, Jan is guilty on all counts. Maybe she’s even addicted to it. It’s an exploration. Everyone has something to hide. The Shadownet’s hard drives are Jan’s secrets. They're stolen from her family’s computer recycling business Assured Destruction. If the police found out, Jan’s family would lose its livelihood.

When the real people behind Shadownet’s hard drives endure vicious cyber attacks, Jan realizes she is responsible. She doesn’t know who is targeting these people or why but as her life collapses Jan must use all her tech savvy to bring the perpetrators to justice before she becomes the next victim.

"Stewart seamlessly incorporates the fast-paced world of social media into a unique writing style that perfectly captures the world of a modern teen. Janus’ complicated web of computer networks is intricate enough to leave readers thoroughly engrossed by her hacking acumen while remaining accessible to even the least tech-savvy readers. Many teenage girl readers will find unconventional, strong Janus to be an intriguing role model, but as a clever, talented and often slightly dark hacker, she transcends gender stereotypes and will find fans among teen boy readers as well.

Michael sees writing as a brilliant excuse to tramp across the world, and it has taken him abroad as a leader of Antarctic expeditions, crew of a tug boat on the Baltic Sea, paddling the Zambezi River, climbing in Sumatra, spelunking in Belize and, of course, singing inside the King’s Chamber of the Great Pyramid while lying in its rose-colored sarcophagus.

Travel and a fascination with reading and religion spawned 24 Bones, which draws from Egyptian myth and is influenced by Jungian and Gnostic themes. Re-released in 2013.

His second novel, a 2011 Epic Award Finalist, is closer to home but a setting no less exotic, the Alberta Tar Sands. A horror about a revenant prehistoric vampire titled THE SAND DRAGON.

In 2012, HURAKAN launched: a Mayan themed thriller which pits the Maya against the MS-13 with a New York family stuck in the middle.

In addition, a full length graphic novel THE TERMINALS is in production and has already been optioned for film and television.

His four YA graphic novels for the Texty Award winning Boldprint series are published by Oxford University Press Canada.

He's very excited to be publishing the Assured Destruction Series in 2013.

In addition to his writing career, Michael is a four time world champion dragon boat athlete, father of four girls, and husband. He tries very hard to keep life an adventure both on and off the page.

Michael is represented by Talcott Notch.

Assured Destruction Trailer
You can learn a lot about someone looking through their hard drive... The real-world consequences of Janus’ online exploits threaten to bring down her mother's computer recycling business.

Review
Paul Swearingen reviewed on May 6, 2013

Janus is computer-savvy - perhaps too much for her own good. She can handle the 1's and 0's with the best, but her school work, relationships with friends, and even her own self-assuredness come crashing down to a big zero.

"Assured Destruction" is a classic one-sitting read, packed with surprises, glimpses into the world beyond the computer screen, and non-stop action. Highly recommended for anyone who knows a lot, or just a little, about programming and social networks.

You have subscribed to Smashwords Alerts new release notifications for Michael F Stewart.

You have been added to Michael F Stewart's favorite list.

You can also sign-up to receive email notifications whenever Michael F Stewart releases a new book.