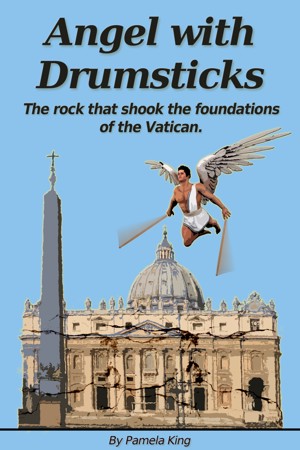 By Pamela King
Rated 4.00/5 based on 1 review
The Church asked them to play, then betrayed their trust. The concert that should have propelled them to international stardom instead destroyed their careers.

Angelo Ferrari, drummer, singer and founder of the Italian Beat rock group recounts how the band was formed and its music ambitions. The story continues to tell the truth about what happened in the 12 months after “La Messa”
“La Messa” was conceived to fulfil the desires of the Vatican II to make the Catholic Church more appealing to young people but, because of resulting bitter and vicious arguments within the church and the media, the Vatican took a course of action that was inconsiderate, hurtful and cold hearted.

The story describes how these young musicians, who had responded to an invitation from the church to perform the first rock mass in Rome had their fledgling careers destroyed by the Vatican.

Reviews of Angel with Drumsticks by Pamela King

I was surprised by how interesting I found this memoir. The synopsis (I have set it out at the end to assist readers of this review) clearly states it is about the results of an ‘experiment’ authorised by the Vatican.

The tale is basically about how some Italian young people responded to an enterprise resulting from the Vatican II council. As the book explains the aim of the council was to ‘make the Church more relevant to the young people, to modernise the Church and to be more welcoming to entice them to follow its spiritual path, rather than exhort them to do so.’ The memoir shows how a young band’s countrymen acclaimed them a success and how their ‘professional’ lives changed as a result. However, as tends to occur with each new generation, there was some conflict, well at least friction, between traditionalists and the up and coming generation of young people. I should point out these young men where in fact not out to be contradictory or to undermine the Roman Catholic Church but wished to help and support the fulfilment of Vatican II aims. In truth they were grateful to have been asked to be part of the project ‘La Messa Dei Giovani’.

As a rule, when reviewing, I try and avoid including spoilers. However, in this case the synopsis, or blurb as some like to call it, sets out clearly what the memoir is about and indicates the consequences for the protagonists of their willing participation in a new venture.

In all honesty I have to say that on the surface this memoir would only appeal to a limited audience:

• Those interested in the decisions etc. of the Vatican II council.
• People who would like to know how the conclusions of Vatican II were or were not implemented.
• Critics of the Roman Catholic Church.
• Vatican conspiracy enthusiasts.
• Conspiracy theorists.
• Historians with a particular interest in The Catholic Church.

Nevertheless, having said the above, I would still strongly encourage others to read this memoir. I confess it is not something that would normally catch my attention but, if I had ignored it, I would have missed out on an interesting and informative read.

Clearly a lot of research has gone into the writing of this book. And the historical photographs and media add a fuller comprehension and understanding to the well-presented facts and information. The book would benefit from further proof-reading; there are numerous minor errors. These however, are mostly typographical or wrong word order and do not detract from the tale.#

Cover: Because so many readers appear to be put undue emphasis on covers when selecting their next read I feel obliged to comment on covers when writing a review. In this case there can be no doubt the Vatican is involved. Therefore it would immediately appeal to anyone interested in Vatican or Roman Catholic Church history and activity. The inclusion of the angel above should raise some curiosity in other readers. So to that end I think the cover does its job.

Rating: I frequently mention how I consider most books realistically fall within the three star rating. Anyone who has followed my blogs or read my book reviews over a period of time will understand my opinion of the rating systems used by such sites as Amazon and Goodreads. I do not propose to reiterate here. Consequently my starting point for this book was three stars; it definitely does not warrant anything less. However, a lot of research has gone into this book and the historical details are presented in a readable and clear manner. The book merits more than three stars and therefore I am very happy to rate it at four (4) stars.

My copy: Though this has not influenced me in the least I should mention the author Pamela King had kindly agreed to review one of my books long before asking if I would review Angel with Drumsticks. Her acceptance of my book was unconditional. She did subsequently ask if I would consider hers and I was more than happy to do so; I enjoy reading other people’s memoirs. Pamela then kindly provided me with a free copy. I must emphasis this did not influence me in the least; I firmly believe, if the rating system is to have any value, we need to be honest in our reviews. To be otherwise does no favours to readers or the authors.

Conclusion: I reiterate how I unexpectedly found this memoir to be an interesting and informative read. Also how I feel I would have missed out by not reading it. In addition the author has presented all the facts and information in a concise and clear manner and avoided making the book unduly long; the length varies depending upon the devise or means you use to read it but on average it only comprises 97 pages, including photograph’s and media extracts. I would recommend this to anyone interested in; a different type of memoir; modern history; music history; Vatican/Roman Catholic history.

Synopsis: ‘A scathing indictment of how the Vatican handled the aftermath of the La Messa Dei Giovani in April 1966, this emotive book chronicles the story from a formerly silent perspective; the founder of the Italian Beat band Angel and the Brains.
It recounts the band formation and its music ambitions and relates the true story of what happened in the 12 months after “La Messa” was conceived to fulfil the desires of Vatican II to make the Catholic Church appealing to young people. Then, because of resulting bitter and vicious arguments within the church and the media, the Vatican took a course of action that was inconsiderate, hurtful and cold hearted.
It explains how the young musicians, responded to an invitation from the church only to have their fledgling careers destroyed.
The reader will discover that many articles in recent years are wrong in their descriptions of what happened following La Messa and falsely acclaim it as being a successful innovation of the Catholic Church at the time.’

You have subscribed to Smashwords Alerts new release notifications for Pamela King.

You have been added to Pamela King's favorite list.

You can also sign-up to receive email notifications whenever Pamela King releases a new book.